Being a Beast: Adventures Across the Species Divide (Hardcover) 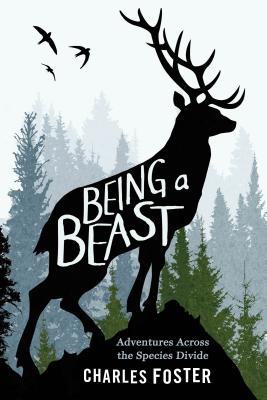 Being a Beast is Charles Foster's memoir of his attempt to inhabit the lives of a half dozen animals. In it, Foster regales us with tales of foraging through urban refuse (as a fox); dashing across moors with dogs in chase (as a deer); burrowing in the woods (as a badger), and more. It's a wacky project but Foster proves himself to be a storyteller of uncommon ability, which helps his book become something more than a curiosity. Rather, it's one of the most audacious and engaging books I've read in ages. Full of humor, brash opinions, and constantly verging on wildness, Being a Beast proves just how tantalizingly close--and yet ever-distant--we are to our fellow creatures. It's the kind of mind-expanding work that challenges readers, in the most fun way imaginable, to reconsider their own humanity. Read it!

How can we ever be sure that we really know the other? To test the limits of our ability to inhabit lives that are not our own, Charles Foster set out to know the ultimate other: the non-humans, the beasts. And to do that, he tried to be like them, choosing a badger, an otter, a fox, a deer, and a swift. He lived alongside badgers for weeks, sleeping in a sett in a Welsh hillside and eating earthworms, learning to sense the landscape through his nose rather than his eyes. He caught fish in his teeth while swimming like an otter; rooted through London garbage cans as an urban fox; was hunted by bloodhounds as a red deer, nearly dying in the snow. And he followed the swifts on their migration route over the Strait of Gibraltar, discovering himself to be strangely connected to the birds.

A lyrical, intimate, and completely radical look at the life of animals—human and other—Being a Beast mingles neuroscience and psychology, nature writing and memoir to cross the boundaries separating the species. It is an extraordinary journey full of thrills and surprises, humor and joy. And, ultimately, it is an inquiry into the human experience in our world, carried out by exploring the full range of the life around us.

Charles Foster is the author of Being a Beast, which won the 2016 Ig Nobel Award for biology and was a finalist for the Baillie Gifford Prize. He teaches medical law and ethics at the University of Oxford and his writing has been published in National Geographic, the Guardian, Nautilus, Slate, the Journal of Medical Ethics and many other venues. He lives in Oxford, England.

“Intensely strange and terrifically vivid… An eccentric modern classic of nature writing. It is packed with wriggling pleasures.”
—The New York Times

“Spectacularly unconventional… A meditative romp that leaves you laughing out loud (and occasionally cursing in anger) even as you soak up the spray of science… Steeped in scholarship, yet directed by his own quirky mysticism, Foster brilliantly takes on questions of animal consciousness, cognition, emotion and theory of mind.”
—The New York Times Book Review

“A blend of memoir, neuroscience and nature writing… that pushes zoological obsession to even greater heights—and depths.”
—The Wall Street Journal

“An embed with the animals… Foster’s quirky book shows how emulating animals not only helps our understanding of them—it makes us more human.”
—People

“Foster wants to be the wild thing, living as wild things live. In Being a Beast, he nearly convinces us that such shape-shifting is possible in the way he lyrically tells his stories—uncensored, intensely descriptive and often hysterical.”
—Milwaukee Journal Sentinel

“A splendid, vivid contribution to the literature of nature… Daringly imaginative… There’s not an ounce of sentimentality in any of it, but instead good science and hard-nosed thought. Furthermore, Foster has the gift of poetry.”
—Kirkus Reviews (starred review)

“A fascinating exploration… His attempts to actually be a beast make this a different sort of wildlife book.… Ultimately, Foster found reciprocity in his unusual and daring immersion in nature, feeling that he now knows the essence of animals’ lives and is somehow newly known in return.”
—Booklist (starred review)

“Woven through the lyrical narrative are neuroscience, facts about the creatures, and philosophy… This book’s fascinating premise, with its unique perspective of how animals perceive their surroundings, will be of interest to scientists, naturalists, and those who enjoy reading about natural history.”
—Library Journal

“An extraordinary account… In lesser hands this could come off as trite or patronizing, but Foster is quick to acknowledge his shortcomings and errors in perspective regarding his project, and he projects a healthy sense of humor.… This approach, along with his willingness to address and avoid the temptation for anthropomorphism, makes his book interesting and informative.”
—Publishers Weekly

“A tour de force of modern nature writing... that shows us how to better love the world beyond ourselves.”
—The Guardian

“Being a Beast is a strange kind of masterpiece: the song of a satyr, perhaps, or nature writing as extreme sport. Foster marks out the distance between us and the beasts in a way that helps sharpen their boundaries and ours—and ours are not always where we think.”
—Financial Times

“This year’s H is for Hawk, the book leaves you feeling that perhaps Helen MacDonald’s bestseller might have been improved if she had only tried to fly.”
—World Travel Guide

“A splendid, vivid contribution to the literature of nature.... Daringly imaginative... There’s not an ounce of sentimentality in any of it, but instead good science and hard-nosed thought. Furthermore, Foster has the gift of poetry.”
—Kirkus Reviews

“Living like an animal in order to write about it sounds like a gimmick. It isn’t. Groundbreaking? Definitely.”
—The Scotsman

“A highly original attempt to break free from the anthropocentrism that often characterizes nature writing… A rich, joyful, and inspiring book.”
—The Independent (UK)