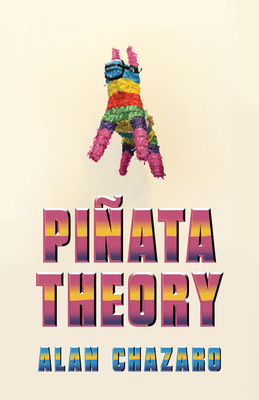 "Cante Jundo, or 'Deep Song, ' is what Garcia Lorca called poetry attached to the rhythms and waves of a continent, its people, its waters, its history. In Alan Chazaro's PI ATA THEORY, those resonances echo across the field 'between the countries of your body, ' the shared stories of cousin-cultures stretching across manmade boundaries. 'I've become a borderland of tongues, ' writes Chazaro, 'a mezcla of eyes.' Here is the pi ata, unbroken, containing, holding together all the promise of youth and imagination. When it spills, it spills lavishly and generously its treasures."

"The great American philosopher Jay Z once said, 'You can't heal / what you don't reveal.' Such is the ethos of this debut collection. Pugilistic, unflinchingly honest, and damn right gorgeous, PI ATA THEORY no se raja in decirnos how broken we are, how broken we've been. Alan takes the hyphen in Mexican-American, this unruly papier-mache we've inherited, and clothes the hollow of us. So before leafing this book, dear reader, take a breath-for your sake, for those who still can't breathe. Stomach his hard-hitting truth, because 'We were made for beatdowns.' This some strong shit, as blunt as a spliffed Swisher, as the dusty 2x4's we'd wield at dangling dulce. Whenever you ready, step inside this circle of homies. We're cheering on our Yay Area champ as he plants both feet in this poetry world. It's his turn. And as he swings for our freedom, sing like we did as kids, 'Dale dale dale, no pierdas el tino.'"

"We don't get to witness a root as it reaches out and absorbs from all around itself. But PI ATA THEORY by Alan Chazaro is evidence of this Mexican-American navigation-it is the bud and the strange blossom that doesn't resist itself like Xicanos sometimes do. And in this way, it is like the serious ache a family joke leaves. It's the men watching other men cry, lost gold teeth and the person that misses it, the thoughts loose like dogs on the street and how in their wildness, we must honor them. These poems reverb under the skin but not necessarily in the colonized body. The speaker in this collection knows better than to make their body fully responsible for the world. And yet, they know where they participate. They don't 'live with dust in their] eyes, ' or with unaccounted admiration for life. PI ATA THEORY is a record of layer, and speaks of us in a humor that is pure pocho-dimensional. Its truth is a deep wound and the 'fuck it' that follows. And still, each poem seems to be written in a special wonder that gathers itself from many places inside the speaker's one body, one root."