Levi Strauss: The Man Who Gave Blue Jeans to the World (Paperback) 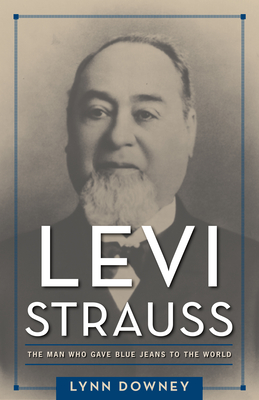 Blue jeans are globally beloved and quintessentially American. They symbolize everything from the Old West to the hippie counter-culture; everyone from car mechanics to high-fashion models wears jeans. And no name is more associated with blue jeans than Levi Strauss & Co., the creator of this classic American garment.

As a young man Levi Strauss left his home in Germany and immigrated to America. He made his way to San Francisco and by 1853 had started his company. Soon he was a leading businessman in a growing commercial city that was beginning to influence the rest of the nation. Family-centered and deeply rooted in his Jewish faith, Strauss was the hub of a wheel whose spokes reached into nearly every aspect of American culture: business, philanthropy, politics, immigration, transportation, education, and fashion.

But despite creating an American icon, Levi Strauss is a mystery. Little is known about the man, and the widely circulated "facts" about his life are steeped in mythology. In this first full-length biography, Lynn Downey sets the record straight about this brilliant businessman. Strauss's life was the classic American success story, filled with lessons about craft and integrity, leadership and innovation.

Lynn Downey is an independent scholar and writer. She was the first in—house historian for Levi Strauss & Co., where for twenty—five years she built the company's archive, traveled as its global ambassador, and thoroughly researched the life of its founder. Please visit her website at http://lynndowney.com/.

"From the first chapter on, the prose is accessible, leanly descriptive, and flows at a nice narrative clip. Downy writes as if narrating a novel, and provides historical detail from the point of view of Strauss himself. . . . Levi Strauss reveals the inspiring story of a man who ultimately transformed modern fashion. It is a quintessential immigrant story with fascinating insights into American history."—Foreword

"Downey offers us a compelling story of  migration, family solidarity, Jewish enterprise networks and the emergence of a marketing empire that spans two centuries, from the nineteenth through the twenty-first. This is a story of California, the nation, and indeed the world, stitched together on a pair of blue jeans. A drama that stretches across the Atlantic and the North American continent, Levi Strauss combines the histories of the Jewish people, Bavaria, California, and the United States and should be read by those interested in how the right combination of place and time, of luck and skill combined to change the world."—Hasia R. Diner, author of Roads Taken: The Great Jewish Migrations to New Worlds and the Peddlers Who Forged the Way

"Levi Strauss is an important business figure in American history. Ms. Downey's account of his life features deep research that creates vivid details. She brings to light his philanthropy and role in building San Francisco and California while selling the world on the product named for him, 'Levi's.'"—Michael J. Makley, author of The Infamous King of the Comstock: William Sharon and the Gilded Age in the West

"There's a lot of history in those jeans you're wearing. As Lynn Downey's wonderfully readable book tells us."—Michael Green, author of Nevada: A History of the Silver State

"This enthralling story tells of the genesis, not only of a landmark item of clothing, but of a dream, an ethos, a world-changing mentality. Levi Strauss is a beautifully penned depiction of a man who, in his amazing journey across cultures and continents, is truly the quintessential American."—Paul Trynka, author of Starman and From Cowboys to Catwalks

"A joy to read. While the book goes well beyond blue jeans, it is a must for any true denim enthusiast. Downey weaves a fascinating tale that dispels many of the shockingly prevalent myths about jeans. It is a pivotal new resource for the history of blue jeans."—Emma McClendon, author of Denim: Fashion's Frontier

"Former Levi Strauss & Co. historian Downey faced a difficult task in writing this biography: almost all of the company's records were lost in the 1906 San Francisco earthquake and few of founder Levi Strauss's personal papers remain, probably due to the same cause (Strauss died in 1902). The author makes good use of newspaper interviews with Strauss and a handful of personal reminiscences about him by others. Mostly, the book, which is as much a history of the company during its founder's lifetime as it is of Strauss himself, relates the businessman/philanthropist's activities. Strauss comes across as an excellent businessman with an affable and modest personality, a bachelor who lived primarily with his extended family. He was socially concerned and active in the Jewish community, and both Jewish and non-Jewish institutions were recipients of his philanthropy. VERDICT While not providing a full or rich portrait of Levi Strauss's personality, this solid business history will appeal to those interested in the history of commerce, California, or American Jewry."—Library Journal

"Downey, an indefatigable researcher and excellent writer, has swept away the considerable detritus of myth and constructed the Strauss biography and the growth of his company based on what she could prove. In the process, she has laid out a story of a culturally and sociologically important hand that continues to excite the imagination of those who are interested in Western history, are fascinated by the story of a man who thought 'outside the box,' or who just wear blue jeans."—Panorama, San Francisco Museum and Historical Society Newsletter

"Downey transcends the narrow limits of biography to create a 'life and times' work that gives the reader a glimpse of what it was like to live in San Francisco during and after the Gold Rush. And she takes pains to separate fact from fiction and myth, letting the reader know the probable and possible by careful evaluation of her sources."—Western States Jewish History

"Crafting a biographical portrait of a known but little studied figure from limited materials is a daunting task and Downey succeeds in bringing Strauss and his era together in a worthwhile and important work."—Nevada Historical Society Quarterly