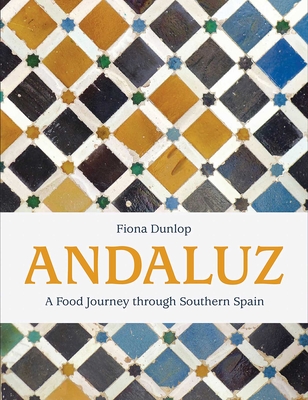 An enthralling Andalucian culinary journey from sierra to sea. For nearly eight centuries from 711 to 1492, Moorish rule in Andalucía brought about a revolution in Spanish culture, resulting in architectural splendors like the Alhambra as well as a rich culinary history. Andaluz is a quest to illustrate the legacy of the Arabs and Berbers in the kitchens of southern Spain today. Couscous, rice, eggplant, oranges, apricots, marzipan, and a wealth of spices are just a few ever-present ingredients that owe their influence to the Moorish people—along with a meticulous attention to the cultivation of olive varieties that Andalucía is renowned for. By digging deep into traditional dishes, scouring markets, and learning from home cooks, local tavern owners, and Michelin-starred restaurant chefs, Fiona Dunlop offers a vivid gastronomic window on this region. Entries from the author’s travel diary accompany sumptuous recipes—from Granada in the east to Córdoba at its heart and Seville in the south—bringing a taste of Moorish Spain to kitchens everywhere. With beautiful food and location photography Andaluz is bound to become the cookbook you will visit time and time again.

Fiona Dunlop is the author of the critically acclaimed New Tapas in which she explored Spain's best tapas bar food and, more recently, The North African Kitchen, which featured the sumptuous home cooking of North Africa. For her latest book she travelled extensively throughout Mexico, a country that she has known for 15 years, tasting the food in restaurants and on the street, and talking to chefs and market people. She writes regularly for the London Observer, Financial Times, Sunday Telegraph and CNN Traveler and has written numerous travel guides, including titles for National Geographic.

"What the reader gets is an extremely palatable mix of history, travel and food. Taste Andalucia's past through the recipes, and explore its hidden corners with this entertaining and erudite writer ' what makes this cookbook really buzz for me is the first section, on the Moorish period of Andalucía, when the region was ruled by Arabs and Berbers from North Africa for eight centuries, reaching its peak during the Caliphate city of Córdoba. Fiona explains how strongly their cuisine and agriculture influenced the local customs and dishes: citrus fruit, rice, figs, chickpeas, almonds, pine nuts, saffron and many more products were all brought across the Mediterranean ' mouth-watering food photography and atmospheric shots of villages and dramatic landscapes. Buen provecho!

"When it's getting cold outside, what could be nicer than leafing through this love letter to Spanish cookery? It's utterly charming and drenched with color, culture, and sunshine.

"Fiona Dunlop does it again and brings us a region's essence. This time it's the turn of?semolina crumbs from Almeria and Almond sponge cake from Antequera. She sums up Southern Spaina pivotal meeting point of religions and culturesand avoids trends and fashion. Andaluz?gives the confidence to find the area's best?sun drenched?dishes and cook them too.
— Yotam Ottolenghi

"This book is a deep dive into the food, culture, and history of southern Spain-a region that is very close to my heart. Fiona Dunlop tells the amazing stories of the immigrants who left their mark on the region-culinary legacies that have made Andalucia one of the most iconic food regions in the world."
— José Andrés

"Both cookbook and travelogue, this homage to the land of the Arabs and Berbers reveals mouth-watering and educational excursions into the region's little towns and the kitchens of local professional chefs and home cooks. A little history adds to the mix, as British author Dunlop (Mexican Modern, 2013) explains how eight centuries of Moorish rule (from the eighth to the fifteenth century) defined southern Spain's personality, culinary and otherwise. Glorious color photographs alone beckon; what differentiates this 100-plus recipe collection are its origins in the cafes and restaurants of Andalusia, relying on chefs to contribute the best of their best. No one will be disappointed. Both unique and familiar fare populate the pages: gazpacho, caramel bread pudding, lemon cake, and seafood paella; falafel with beet tahini, hummus, and pickles; a fig and almond roll. Chef profiles are featured in tandem with restaurant descriptions; who could resist, for instance, a table in the middle of a bullring, or a chat with an 80-year-old preparing marinated turkey. Includes notes on regional specialties, like iberico ham and black pigs, and an annotated list of the featured restaurants. A true work of art and love.

"Dunlop (The North African Kitchen) shares the culinary culture of Andalusiaan autonomous region in the south of Spainin this glorious, lushly photographed cookbook. She organizes her cookbook by province, and includes brief biographies of a few notable cooks. Beginning with the eastwhich ranges from coastal Almeria to mountainous GranadaDunlop serves up a butternut squash soup with almond and bacon, topped with a poached egg, as well as 'lasagne' of filleted fish, in which marinated mackerel is layered with rice paper and ajo blanco (a puree of almonds, pine nuts, sherry vinegar, and sunflower oil). From the centerCordoba to Malagacomes grilled asparagus with pine nut and cumin sauce, and quail baked in pomegranate sauce. And from the westSeville to CadizDunlop presents a mushroom and blue cheese omelet, marinated Iberian pork with raisin couscous, a skirt steak macerated in orange with spelt and pickles, and a confit of pork belly apricots, prunes, dates, and orange (Angeles Sanchez, who contributed the recipe, 'loves the contrast between the fattiness of the pork belly and the acidity of the sour orange'). Desserts are welcomely subtle, such as spiced fritters with honey and coffee-roasted dates with labneh. Ingredients are easily accessed and instructions straightforward.?Dunlop delights in this inviting Spanish cookbook."