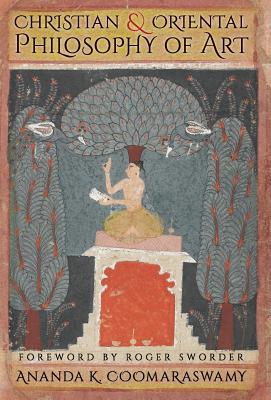 "The contentment of innumerable people can be destroyed in a generation by the withering touch of our civilization; the local market is flooded by a production in quantity with which the responsible maker of art cannot complete; the vocational structure of society, with all its guild organization and standards of workmanship, is undermined; the artist is robbed of his art and forced to find himself a 'job'; until finally the ancient society is industrialised and reduced to the level of such societies as ours in which business takes precedence of life. Can one wonder that Western nations are feared and hated by other people, not alone for obvious political or economic reasons, but even more profoundly and instinctively for spiritual reasons?" So writes Ananda K. Coomaraswamy--historian of traditional metaphysics and art, and social critic--in Christian and Oriental Philosophy of Art. The nine essays in this book are among Coomaraswamy's most accessible and rewarding. They address such subjects as the true function of aesthetics in art, the importance of symbolism, and the importance to artists of the intellectual and philosophical backgrounds of their culture. They demonstrate also that abstract and primitive art, despite superficial resemblances, are completely divergent; and they deal with the common philosophy that pervades all great art, the nature of medieval art, folklore, and modern art, the beauty inherent in mathematics, and the union of traditional symbolism and individual portraiture in premodern cultures. The late A. K. Coomaraswamy, curator of Indian art at the Boston Museum of Fine Arts, uniquely combined the roles of art historian, philosopher, orientalist, linguist, and expositor. His knowledge of the arts and handcrafts of the Orient was unsurpassed, and his numerous monographs on Oriental art either established, or revolutionized, entire fields. Coomaraswamy was one of the foremost Orientalists of his time, with an almost unmatched understanding of traditional culture. He mastered the philosophic and religious terrain of the entire premodern world, East and West; and for him primitive, medieval European, and classical Indian experiences of truth and art were only different dialects of a common language.