Jesse James and the Lost Templar Treasure: Secret Diaries, Coded Maps, and the Knights of the Golden Circle (Paperback) 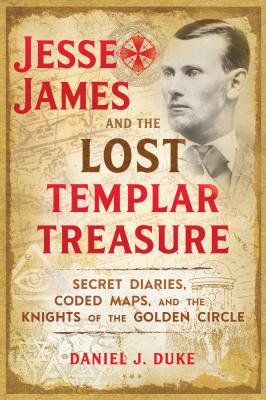 An investigation into the lost treasures of Jesse James and the Freemasons and their connections to the Templars, Rosicrucians, and the Founding Fathers

Jesse James left behind secret diaries and coded treasure maps. Working to decrypt these maps, Daniel J. Duke--the great-great-grandson of Jesse James--reveals hidden treasures yet to be recovered as well as connections between the infamous train robber and Freemasonry, the Knights Templar, the Founding Fathers, and Jewish mysticism.

The author explains how Jesse James faked his death and lived out his final years under the name James L. Courtney. He uncovers James’ affiliation with the Knights of the Golden Circle, a secret society that buried Confederate gold across the United States, and shows how the hidden treasures coded into James’ maps were not affiliated with the KGC but with the Freemasons, the Knights Templar, and the treasure of the Temple Mount. Using sacred geometry, gematria, and the Kabbalistic Tree of Life symbol, the author explains the encoded map technique used by the Freemasons to hide and later recover treasures, an esoteric template known as the “Veil”. He shows how the Veil template confirms the locations of Jesse James’ recovered treasures in Texas as well as other suspected treasure locations, such as the Oak Island Money Pit and Victorio Peak in New Mexico.

Tracing knowledge of the Veil template back through the centuries, the author reveals the Veil hidden on the cover of a 16th-century book that contains a secret map of the New World and the “hooked X” symbol of the Knights Templar. He shows how the template was used not only to hide treasures but also sacred knowledge and relics, such as within the Bruton Vault, which originally contained secrets tied to Francis Bacon, the Freemasons, the Rosicrucians, and the founding of the United States. Applying the Veil template alongside the esoteric secrets of Poussin’s famous painting, Et In Arcadia Ego, and Cassini’s Celestial Globe, Duke shows how the template reveals other Templar and Freemason treasure sites scattered throughout America and around the world.

Daniel Duke, the great-great-grandson of Jesse James, grew up surrounded by stories of lost outlaw treasures. For more than two decades he has researched the mysteries involving his family, Freemasonry, and the Knights Templar. He lives in Texas.

“Daniel J. Duke has successfully cracked open part of the mystery surrounding Templar treasure from Jerusalem that had been moved to the Americas to help establish a free nation. Jesse James and the Lost Templar Treasure goes beyond just theorizing that treasure was moved to the Americas and in fact demonstrates the connections and methods utilized to hide certain treasures. There have always been those who have sought to shape history to ensure that freedoms and artifacts could be preserved in the Americas. Daniel J. Duke’s book is on the cutting edge of revealing some of what has remained hidden. Anybody who is interested in the Templar legacy and their connection with the Americas will find true gems in this book!”
— Timothy W. Hogan, Templar Grand Master, author, and lecturer

“Having inadvertently fallen down one of the many hidden wells of esoteric knowledge dotted across the North American landscape, author Daniel J. Duke--the great-great-grandson of the outlaw Jesse James--weaves a wonderful tale of Southern intrigue and mysterious treasure. His familial connection enables him to explore the ancient mysteries within the Tree of Life and Veil templates and their connections over time to the Freemasons, the Knights Templar, the Knights of the Golden Circle, Francis Bacon and the Rosicrucians, and Sovereign Grand Commander Albert Pike. Where he travels next on his personal journey of discovery will be the key.”
— William F. Mann, author of The Knights Templar in the New World, The Templar Meridians, and Templar

"Duke fulfilled this objective all the way to 5-stars. If you love history, mysteries, treasure hunting and of course Jesse James, do not hesitate to give your full attention to Jesse James and the Lost Templar Treasure."
— Kris Helt, Whiskey & Wit Book Review

"Jesse James and the Lost Templar Treasure is an interesting read full of facts about history. The reader will learn more concerning Jesse James and the groups to which he belonged. It is evident that Duke put a lot of time and research into this book. I recommend this book for the history buff and for those with a love for treasure stories and conspiracy theories."
— Rachel Dehning, Seattle Book Review