A Kind of Freedom: A Novel (Hardcover) 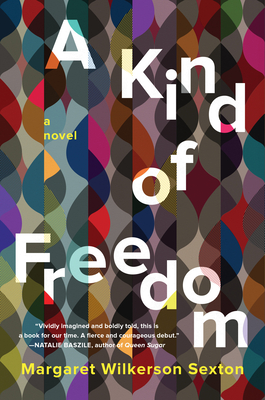 “Here’s the thing about this debut: while the story Margaret Wilkerson Sexton tells of three generations in New Orleans is absolutely brilliant and the prose so beautiful at times I underlined phrases, what is most remarkable are the parts that she didn’t include. It takes great skill to satisfy a reader and also leave them puzzling over the untold parts. Sexton’s A Kind of Freedom is quietly epic. I dare you to not fall in love with Evelyn, Jackie, and T.C. (And I’m secretly waiting for the film rights to be sold; it would be a brilliant movie, if done right!)”
— Rachel Watkins, Avid Bookshop, Athens, GA

This debut novel from the author of On the Rooftop, a Reese Witherspoon Book Club Pick, “brilliantly . . . follows three generations of a Black New Orleans family as they struggle to bloom amid the poison of racism” (People).

Evelyn is a Creole woman who comes of age in New Orleans at the height of World War II. In 1982, Evelyn’s daughter, Jackie, is a frazzled single mother grappling with her absent husband’s drug addiction. Jackie’s son, T.C., loves the creative process of growing marijuana more than the weed itself. He was a square before Hurricane Katrina, but the New Orleans he knew didn’t survive the storm. For Evelyn, Jim Crow is an ongoing reality, and in its wake new threats spring up to haunt her descendants. Margaret Wilkerson Sexton’s critically acclaimed debut is an urgent novel that explores the legacy of racial disparity in the South through a poignant and redemptive family history.

Margaret Wilkerson Sexton, born and raised in New Orleans, studied creative writing at Dartmouth College and law at UC Berkeley. Her debut novel, A Kind of Freedom, was long-listed for the National Book Award and the Northern California Book Award, won the Crook's Corner Book Prize, and was the recipient of the First Novelist Award from the Black Caucus of the American Library Association. Her second novel, The Revisioners, was a national bestseller, recipient of an NAACP Image Award, and a New York Times Notable Book. She lives in the San Francisco Bay Area with her family.

A 2017 National Book Award Nominee
Winner of the Crook's Corner Prize
Winner of the First Novelist Award from the Black Caucus of the American Library Association
A New York Times Notable Book of 2017 & Editor’s Choice
Named a Best book of 2017 by the San Francisco Chronicle, BBC Culture, Southern Living, the Chicago Public Library, and more.

"This moving debut is ingeniously told in its passage back and forth through lives and changing times. Sexton’s portrayal of the intersection of character and circumstance is astute and nuanced, showing how adversity is amplified by each era’s racial injustice." —The Washington Post

"Brilliantly juxtaposing World War II, the '80s and post–Katrina present, Sexton follows three generations of a Black New Orleans family as they struggle to bloom amid the poison of racism. The author's deep knowledge of her city and unerring ear for dialogue help bring her unforgettable characters to life." —People

"As tragic as it is necessary. Each character is compelling and nuanced, making the reader all the more sorry to leave them at book’s end." —Shondaland

"A Kind of Freedom glimmers with hope." —BBC Culture, One of the Ten Best Books of 2017

"In her moving, multigenerational debut novel, Sexton details the many ways racism adds to the difficulties faced by its characters." —San Francisco Chronicle, One of 100 Best Books of 2017

"Sad, proud, provocative and quietly educational, with dialogue that credibly spans 70 years of Black New Orleans vernacular, A Kind of Freedom begs for a screen adaptation. You wait and see." —Newsday

"Sharp–eyed, generous, and specific in its portrayal of life in the Big Easy, A Kind of Freedom is a remarkably assured debut." —East Bay Express, Pick for 2017's Best Fiction

"Sexton's handling of switchbacks between chapters featuring the different generations and characters is deft, swift and seamless, indicative of a more seasoned novelist." —East Bay Times

"Three New Orleans generations make up Margaret Wilkerson Sexton’s heart–wrenching novel, A Kind of Freedom, each suffering through desires, ambitions and brutal limitations . . . Sexton, who grew up in New Orleans but now lives in the Bay Area of California, tears at your heart with this multi–generational tale in which readers hope for the best for this family but know society’s limitations and empty promises will drag them down. And yet, hope remains. Or maybe the possibility of hope." —Monroe News Star

"[A] great work of literature. Riveting, intense and compelling." —Ebony, One of Five Great Reads to Fall Into

"This generational arc is largely related to systemic racism, but to simplify this novel as an exploration of such minimizes Wilkerson’s incredible achievement. Rather, A Kind of Freedom is a portrait of a family and a richly layered exploration of their sufferings . . . What is most remarkable about the tapestry of these stories is the way each person’s section is written a little differently from the last, like varying fabrics. Evelyn’s chapters and T.C.’s are written so distinctly that at times it feels like a completely different person wrote them. Sexton’s ability to change the style of writing to fit the time period is one of the most impressive aspects of the novel. Equally notable is how vividly each character is portrayed. Not only do each of the characters feel relatable, but they’re so fully realized that they stay with you long after finishing the story. That this multigenerational novel is a mere 228 pages and still manages to create such lifelike characters is an impressive feat . . . This remarkable debut marks Margaret Wilkerson Sexton as a writer worth watching." —Chicago Review of Books

"It’s hard to believe that A Kind of Freedom is Sexton’s first novel . . . Given the recent happenings in Charlottesville, Virginia, it’s hard to imagine a more relevant release date for this lovely, important book. This is a book for our time." —New York Journal of Books

"[T]his emotionally wrenching, character–rich debut spans three generations in a city deeply impacted by segregation, economic inequality, and racial tensions . . . Sexton’s narrative navigates complex topics with an adroit sensitivity that lends sympathy to each character’s realistic, if occasionally self–destructive, motivations. Being able to capture 70 years of New Orleans history and the emotional changes in one family in such a short book is a testament to Sexton’s powers of descriptive restraint. In this fine debut, each generation comes with new possibilities and deferred dreams blossoming with the hope that this time, finally, those dreams may come to fruition." —Publishers Weekly, starred review

"Sexton's debut novel shows us that hard work does not guarantee success and that progress doesn't always move in a straight line." —Kirkus Reviews

"In A Kind of Freedom, Margaret Wilkerson Sexton delivers a fresh and unflinching portrait of African American life and establishes herself as a new and much–needed voice in literature. Vividly imagined and boldly told, A Kind of Freedom is a book for our time. A fierce and courageous debut." —Natalie Baszile, author of Queen Sugar