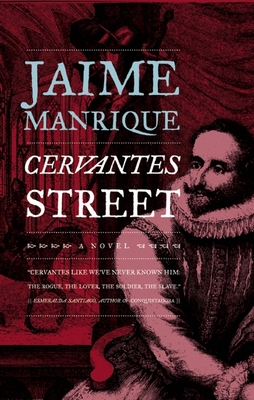 A Latinidad List Best Book of 2012 Cervantes Street is exciting to read...Under Mr. Manrique's pen, the world of renaissance Spain and the Mediterranean is made vivid, its surface cracking with sudden violence and cruelty...This novel can be read as a generous salute across the centuries from one writer to another, as a sympathetic homage and recommendation...Cervantes Street brings to life the real world behind the fantastic exploits of the knight of La Mancha. The comic mishaps are funnier for being based in fact. The romantic adventures are more affecting. Cervantes Street has sent me back to Don Quixote.
--The Wall Street Journal Manrique adopts a florid, epic style for his tale of 16th-century Spain, one with the quality of a tale told by a troubadour rather than written on the page. He ably captures the human qualities of the legendary writer, as well as his swashbuckling.
--Publishers Weekly Manrique has penned a well-written, well-researched, fast-paced narrative ... An entertaining book ... and a superb retlling of Cervantes's life.
--Library Journal Cervantes Street is historical fiction at its best. Compact and intense... The characters are wonderfully draw, the environments are detailed and colorful and the feeling is genuine... a gripping, adventuresome novel with profound insight into the ways in which we choose our destiny.
--New York Journal of Books "The novel is exciting, paced well, interesting and with a literary mystery to boot."
--Seattle Post-Intelligencer Hold onto your hats because Manrique has crafted a brilliant pastiche... This fun, diverting, swift odyssey into Cervantes' travels... puts tall tales where they belong, in capable fiction... Cervantes Street should be in your hands.
--La Bloga A sprawling vivacious big-hearted novel. Manrique is fantastically talented and this is perhaps his masterpiece.
--Junot D az The actual facts of Miguel de Cervantes's life seem to be snatched from an epic tale: an impoverished and talented young poet nearly kills a man in a duel and is forced into exile; later, he distinguishes himself in battle and is severely wounded, losing the use of his left hand; on his way back to Spain his ship is captured by pirates and he is sold into slavery in Algiers; after prolonged imprisonment and failed escape attempts, he makes his way back home, eventually settling in a remote village in La Mancha to create his masterpiece, the first modern novel in Western literature: Don Quixote. Taking the bare bones of Cervantes' life, Jaime Manrique has accomplished a singular feat: an engaging and highly accessible take on a brilliant, enigmatic man and his epoch. This is an archetypal tale of rivalry and revenge--featuring Cervantes's antagonistic relationship with the man who would go on to write his own sequel to Don Quixote--that is sure to garner comparisons to Peter Shaffer's Amadeus, Alexandre Dumas' The Count of Monte Cristo, and, with its extraordinary recreation of the life and times of Cervantes, to Hilary Mantel's Wolf Hall. Jaime Manrique is a novelist, essayist, and poet. His critically acclaimed novels include Latin Moon in Manhattan and Our Lives Are the Rivers. He is a Distinguished Lecturer in the Department of Foreign Languages and Literature at the City College of New York.

Jaime Manrique: Jaime Manrique is a novelist, essayist, and poet who lives in New York. His critically acclaimed novels include Colombian Gold, Latin Moon in Manhattan, and Our Lives are the Rivers.