History Is All You Left Me (Hardcover) 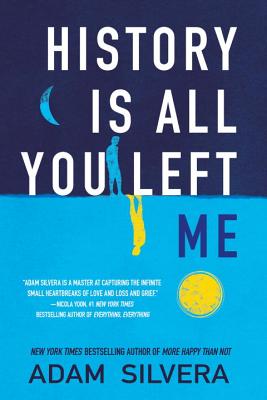 "This book will make you cry, think, and then cry some more."
—Nicola Yoon, #1 New York Times bestselling author of Everything, Everything

From the New York Times bestselling author of More Happy Than Not comes an explosive examination of grief, mental illness, and the devastating consequences of refusing to let go of the past.

When Griffin’s first love and ex-boyfriend, Theo, dies in a drowning accident, his universe implodes. Even though Theo had moved to California for college and started seeing Jackson, Griffin never doubted Theo would come back to him when the time was right. But now, the future he’s been imagining for himself has gone far off course.

To make things worse, the only person who truly understands his heartache is Jackson. But no matter how much they open up to each other, Griffin’s downward spiral continues. He’s losing himself in his obsessive compulsions and destructive choices, and the secrets he’s been keeping are tearing him apart.

If Griffin is ever to rebuild his future, he must first confront his history, every last heartbreaking piece in the puzzle of his life.

Adam Silvera was born and raised in the Bronx. He has worked as a bookseller, as a consultant at a literary development company, as a reviewer of children’s and young adult novels. He is also the author of the highly acclaimed debut novel, More Happy Than Not, and the New York Times bestseller They Both Die at the End. He lives in Los Angeles and is tall for no reason.

Praise for History Is All You Left Me

“Adam Silvera is a master at capturing the infinite small heartbreaks of love and loss and grief. History Is All You Left Me is a beautiful meditation on what it means to survive devastating loss. This book will make you cry, think, and then cry some more.”
—Nicola Yoon, #1 New York Times bestselling author of Everything, Everything

“A complex, touching valentine to love and friendship . . . [Silvera] gets the small details of love and loss exactly right. These moments are framed in exquisite prose . . . In this emotionally charged story, Griffin’s desire to be honest with himself and others leads the reader to a greater understanding of how it feels to have a conflicted heart.”
—The Washington Post

“Through Griffin, Silvera presents an eloquent, in-depth examination of 'whatever comes next,' of the ways in which the grieving process both isolates people and draws them together.”
—Chicago Tribune

“History Is All You Left Me overflows with tenderness and heartache. Even when its hero is screwing up royally, maybe especially then, Silvera's humanity and compassion carve out a space where it's not the falling that's important, it's how you pick yourself back up. There isn't a teenager alive who won't find their heart described perfectly on these pages.”
—Patrick Ness, New York Times bestselling author of The Rest of Us Just Live Here and A Monster Calls

“Silvera’s wrenching sophomore effort . . . is not for the faint of heart . . . A love story for the ages.”
—Barnes and Noble Teen Blog

“The YA world has been taken by storm by Adam Silvera.”
—The Writer

“If you think Silvera’s debut novel More Happy Than Not was good, then you’re about to be blown away when History Is All You Left Me hits shelves . . . This novel does more than just bring light to the LGBTQ community, it helps bring mental health awareness into a world that desperately needs it.”
—Hypable.com

“A pain achingly realistic and emotional book about first loves, loss and what comes next.”
—The Daily American

“Silvera delivers another twisty novel about self-exploration, adolescent relationships and the bond between first loves. History Is All You Left Me is a tale for today’s youth—one that embraces the essence of time and love.”
—Bookpage

“A mesmerizing yet sorrowful story of love, death, and moving on.”
—Republic World (India)

“Adam Silvera is wrenchingly good at writing about grief . . .History Is All You Left Me quietly shows how dealing with loss will help Griffin see himself and his world more clearly. It's a painful coming of age, but a beautifully written and very satisfying one.”
—Shelf Awareness, Starred Review

“Silvera packs a powerful emotional punch in this multilayered story told partly in flashbacks by Griffin, who's mourning the sudden death of his best friend and first love . . . The conversational yet profound tone of the book highlights the author's ear for the musicality of language and his ability to convey deep emotion through attention to its cadence and flow. A novel to savor long after it ends.”
—Kirkus Reviews, Starred Review

“Though Griffin’s vision is clouded by grief, passion, and guilt, readers will have no trouble understanding how unmoored Griffin has become: Silvera excels at capturing the confusion and pain he feels . . . Griffin has much to puzzle out as he tries to move forward, but he does so with the reassurance that real love exists.”
—Publishers Weekly, Starred Review

“Silvera’s splendid sophomore novel is filled with tantalizing questions about lies and honesty, love and loss, and past and present . . . Beautifully realized, character-driven work of literary fiction . . . In those questions, they will find an unsparing honesty that brings closure to the novel and to Griffin’s quest to let go of the past and embrace the future.”
—Booklist, Starred Review

“Silvera offers a gem of a story about first love and great loss . . . Profound . . . It is so easy to idolize a first love, and even easier to idolize someone who has died. Griffin’s gradual awareness of Theo’s flaws is the true heart of this standout title.”
—School Library Journal, Starred Review

“History Is All You Left Me is a moving portrayal of two teens grieving over the same lost love. Adam Silvera’s characters grab your heart and do not let go. This beautifully sad book will captivate teen readers.”
—Angela Frederick, librarian, YALSA member, and 2015 Printz Committee member

“Masterful . . . Griffin, Theo, Jackson, and Wade will stay with teen readers for a long time because they are so achingly real. YA readers need these characters and all of their edges, their mistakes, their losses and, yes, their joy. This is a complicated, nuanced, elegantly crafted work. It’s a book that’s going be a lifeline for teens, an out-stretched hand that assures them they are not alone and their story will go on. This is a book beyond compare.”
—Angie Manfredi, Head of Youth Services for the Los Alamos County Library System and 2016–2017 Stonewall Book Award Committee member

“Silvera’s prose is raw and lyrical, a good fit for Griffin’s intensity, and the minutiae of both romance and grief are closely observed and deeply felt . . . Griffin himself is an indelible character who will linger in readers’ sympathies after the last page isturned.”
—The Horn Book Magazine

“Silvera finds a depth in Griffin’s story that is remarkable . . . One of the best young authors dealing with issues like sexuality, depression, mental health, and the complex and often confusing relationship rules of Millennials and younger generations. He may be categorized as YA, but Silvera is a writer well worth reading no matter your age.”
—About.com

“Grief is strong and realistically portrayed in this tale of relationships and love.”
—School Library Connection

“Silvera’s singularly authentic voice is back in force in his second novel. Like The Fault in Our Stars, here is a book that explores grief and vulnerability with honesty, without talking down to the reader. The nuanced, complex characters nearly walk off the page, and the compulsively readable story and artfully chosen details make this a book worth getting lost in!”
—Shay McClean, Children’s Buyer at Third Street Books

“In this authentic and charged sophomore novel, Silvera presents a narrator whose grief is nearly tangible. As Griffin revisits his path with Theo—best friend, ex-boyfriend, and love of his life—he discovers that their history is much more than a neat and tidy linear line. Once again, Silvera gifts readers with an emotional wrecking ball of a novel, leaving them stronger for the experience.”
—Sara Grochowski, Children’s/YA Buyer at Brilliant Books

Praise for More Happy Than Not

“Beautiful . . . With a precision that feels at once dreamy and casually reportorial . . . Mandatory reading.”
—The New York Times Book Review

“A one-of-a-kind voice and a genius idea . . . A mesmerizing, unforgettable tour de force.”
—John Corey Whaley, National Book Award finalist and author of Where Things Come Back and Noggin

“The honesty of his words and his ability to tell a story make you realize that we’ve been waiting for him.”
—Holly Goldberg Sloan, author of Counting by 7s and I’ll Be There

“Silvera pulls his punches with an energy, daring, and intensity that left me spellbound—and reminded me why I love to read.”
—Adele Griffin, author of The Unfinished Life of Addison Stone

“Poignant . . . So engrossing that once you start it, you won't be able to put it down. Don't say we didn't warn you.”
—TeenVogue.com

"Heartfelt . . . The futuristic twist, with its poignant repercussions, drives home a memorable, thoroughly contemporary theme: who you are inside is not something that can or should be erased . . . Lose your memories, lose your pain, lose yourself.”
—Chicago Tribune

“A gut-wrenching story telling of race and sexuality.”
—The Guardian

“[An] important addition to speculative fiction for young adults . . . Silvera's tale combines the best features of science fiction with social justice in this engaging read, as Aaron finds a place where he belongs.”
—Los Angeles Times

“This is definitely at the top of my YA list. There’s a realness to its main character, Aaron
Soto, and his struggle to be who he really is. It confronts race and sexuality in a way I haven’t seen in the genre before.”
—Latina Magazine

“An honest depiction of the pains of navigating the teen years . . . A multifaceted look at some of the more unsettling aspects of human relationships. A brilliantly conceived page-turner.”
—Kirkus Reviews, Starred Review