That's Not a Feeling (Paperback) 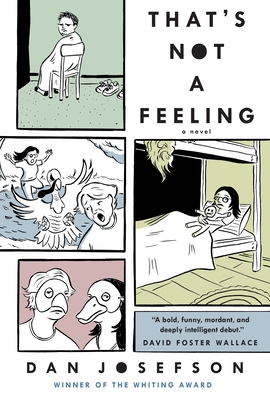 Benjamin arrives with his parents for a tour of Roaring Orchards, a therapeutic boarding school tucked away in upstate New York. Suddenly, his parents are gone and Benjamin learns that he is there to stay. Sixteen years old, a two-time failed suicide, Benjamin must navigate his way through a new world of morning meds, popped privileges, candor meetings and cartoon brunches—all run by adults who themselves have yet to really come of age.

The only person who comprehends the school's many rules and rituals is Aubrey, the founder and headmaster. Fragile, brilliant, and prone to rage, he is as likely to use his authority to reward students as to punish them. But when Aubrey falls ill, life at the school begins to unravel. Benjamin has no one to rely on but the other students, especially Tidbit, an intriguing but untrustworthy girl with a "self-afflicting personality." More and more, Benjamin thinks about running away from Roaring Orchards—but he feels an equal need to know just what it is he would be leaving behind.

Dan Josefson has received a Whiting Award, a Fulbright research grant and a Schaeffer Award from the International Institute of Modern Letters. He has an MFA from the University of Nevada, Las Vegas. He lives in Brooklyn, and works at a book club for children's literature.

"Dan Josefson is a writer of astounding promise and That's Not a Feeling is a bold, funny, mordant, and deeply intelligent debut."
—David Foster Wallace, author of Infinite Jest

"If That's Not a Feeling were a fifth novel, it would be a triumph. As a first novel, it is an astonishment. Dan Josefson sails along the scary edge of perfection in this book, and does so with style, empathy, compassion, humor, and wisdom."
—Tom Bissell, author of The Father of All Things

“Deft, tempered prose...unornamented, but never flat or blunted, so that the characters, not the sentences, heat the pages.”
—New York Times Book Review

“The prose is matter-of-fact, even placid, and studded with perfectly phrased
gems, a cool surface to a work that is rich in feeling. A wonderful and noteworthy debut.”
—Booklist, Starred Review

“Funny at times, and more than a little sad, the book’s form perfectly mirrors Benjamin’s profound sense of dislocation and uncertainty. This is a powerful, haunting look at the alternate universe of an unusual therapeutic community.”
—Library Journal, Starred Review

“Metaphor is a hell of a weapon in Dan Josefson's debut That's Not a Feeling...a funny, humane, egalitarian, and gently challenging book, one to quote and roar over, and one that gets better and stranger as it goes.”
—SF Weekly, "Instant Classic"

"This is a book of enormous intelligence, and even more heart."
—Jim Shepard, author of Like You'd Understand, Anyway

“An incredibly daring experiment in characterization, and one that will surely reward many rereadings.”
—School Library Journal, "Adult Books for Teens"

“It’s difficult to read this novel and not feel challenged, moved, devastated, and excited for Josefson’s next book.”
—Tottenville Review

“Not only is this novel a humorous narrative adventure, it’s also deeply moving, subtle in its approach, and beautiful in its execution.... A vivid portrait of human frailty and perseverance, one that makes us question what breaks us, what heals us, and what makes that journey worth it.”
—Tethered by Letters