An Atlas of Geographical Wonders: From Mountaintops to Riverbeds (historical maps and tableaux from the nineteenth century, includes maps by Alexander von Humboldt) (Hardcover) 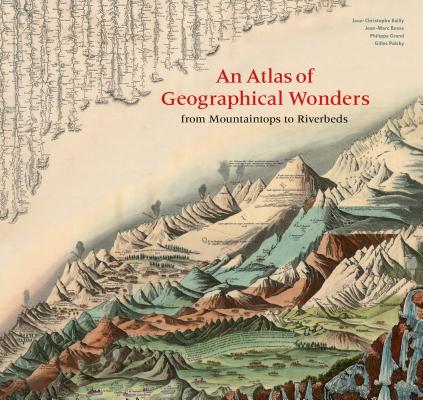 This is the first book to catalog comparative maps and tableaux that visualize the heights and lengths of the world's mountains and rivers. Produced predominantly in the nineteenth century, these beautifully rendered maps emerged out of the tide of exploration and scientific developments in measuring techniques. Beginning with the work of explorer Alexander von Humboldt, these historic drawings reveal a world of artistic and imaginative difference. Many of them give way—and with visible joy—to the power of fantasy in a mesmerizing array of realistic and imaginary forms. Most of the maps are from the David Rumsey Historical Map Collection at Stanford University.

Gilles Palsky is a professor of geography at the University of Paris. He has published a history of statistical cartography of the nineteenth century.

Philippe Grand is the author of nine books of poetry and publisher of Fage editions of Lyon, France.

"An Atlas of Geographical Wonders is a feast for the eyes, using its layout to good effect to show off the wonderfully reproduced images."
- The Inquisitive Biologist (UK)

"As much a work of art as a history of cartography and exploration, this superb volume ...documents the 19th-century fervor for comparative maps and tableaux-illustrations showing, for example, the highest mountains in the world juxtaposed against one another. A chapter introducing the cartographic phenomenon in general is followed by one on the sketch that started it all, Alexander von Humboldt's 1805 Geographie des plantes e¿quinoxiales. The beautifully reproduced illustrations, many of which are housed in the David Rumsey Historical Map Collection at Stanford University, are fascinating by themselves but are accompanied by essays examining the images and their creation." - Library Journal

"Anyone who wants to understand the origins of the modern infographic will be thrilled to discover An Atlas of Geographical Wonders....The book offers a compelling view of a discipline that sought to elucidate the physical world at a moment when humanity began to make sense of it through tables and charts-or what we today call 'data visualization.'" - The Magazine Antiques

"An Atlas of Geographical Wonders: From Mountaintops to Riverbeds catalogs the maps, prints and tableaux that emerged from the work of 19th-century explorers. The images, most of them from the David Rumsey Historical Map Collection at Stanford University, display the era's advances in scientific measuring techniques. At the same time, they also show the artists' pleasure-and sometimes bursts of fantasy-in rendering and imagining the world's mountains and rivers."
- The Wall Street Journal

"Part history, part geography, AN ATLAS OF GEOGRAPHICAL WONDERS: From Mountaintops to Riverbeds illuminates the world of famous 19th-century expeditions. The authors - Jean-Christophe Bailly, Jean-Marc Besse, Philippe Grand and Gilles Palsky - have amassed drawings, maps, graphs and tableaus that trace the adventures of various explorers and show how the science of measuring altitude developed."
- The New York Times

"The 156 eye-catching tableaux reproduced in this atlas are fascinating variations on a single theme, blending scientific accuracy and graphic inventiveness in fantasy landscapes that convey overarching geographic truths."
- Natural History