Tales from the San Francisco Giants Dugout: A Collection of the Greatest Giants Stories Ever Told (Tales from the Team) (Hardcover) 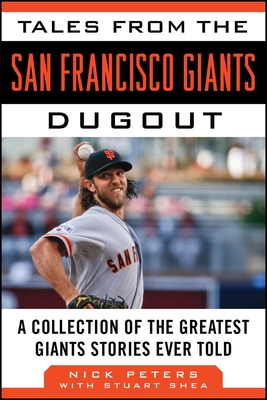 With three World Series titles in five years, starting in 2010, the San Francisco Giants are one of the powerhouse major league teams of the 21st century. Led by pitcher Madison Bumgarner, the Giants have dominated baseball. But this is more than just the 21st Century.

Fans continue to flock to AT&T Park to support their team, and will find just as much excitement within the pages of the newly updated Tales from the San Francisco Giants Dugout. The rich tradition of the San Francisco Giants has provided indelible memories for their fans ever since they moved from New York’s Polo Grounds to Seals Stadium in 1958. Here are stories of Willie May and Willie McCovey, Juan Marichal and Gaylor Perry, Orlando Cepeda and Will Clark, and more.

Author Nick Peters captures the most exciting, humorous, and poignant moments of the team’s years on the West Coast. From the intense rivalry with the Dodgers and the age of Willie Mays to amazing World Series victories, this book has all that a Giants fan needs and will certainly want.

Whether you are a New York Yankees fan or hail from Red Sox nation; whether you are a die-hard Green Bay Packers or Dallas Cowboys fan; whether you root for the Kentucky Wildcats, Louisville Cardinals, UCLA Bruins, or Kansas Jayhawks; whether you route for the Boston Bruins, Toronto Maple Leafs, Montreal Canadiens, or Los Angeles Kings; Sports Publishing will have a book for you. While not every title we publish becomes a New York Times bestseller or a national bestseller, we are committed to publishing books on subjects that are sometimes overlooked by other publishers and to authors whose work might not otherwise find a home.

Nick Peters (1939-2015) reported on the Giants for almost half a century. He never missed a Giants’ opening home game. In 2009, he won the Baseball Writers Association of America J. G. Taylor Spink Award. He lived in Elk Grove, California. Peters passed away in March 2015.
Stuart Shea is a freelance writer specializing in sports and music. He is the author of Wrigley Field: The Unauthorized Biography. When he’s not busy discovering new music, he can be found co-running Bardball.com, the Internet’s top site for baseball poetry.