Stars at Dawn: Forgotten Stories of Women in the Buddha's Life (Paperback) 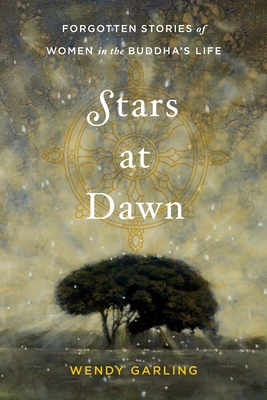 A contemporary and provocative examination of the life of the Buddha highlighting the influence of women from his journey to awakening through his teaching career--based on overlooked or neglected stories from ancient source material.

In this retelling of the ancient legends of the women in the Buddha’s intimate circle, lesser-known stories from Sanskrit and Pali sources are for the first time woven into an illuminating, coherent narrative that follows his life from his birth to his parinirvana or death. Interspersed with original insights, fresh interpretations, and bold challenges to the status quo, the stories are both entertaining and thought-provoking—some may even appear controversial. Focusing first on laywomen from the time before the Buddha’s enlightenment—his birth mother and stepmother, his co-wives, and members of his harem when he was known as Prince Siddhartha—then moving on to the Buddha’s first female disciples, early nuns, and to female patrons, Wendy Garling invites us to open our minds to a new understanding of their roles.

Wendy Garling is a writer, mother, Buddhist practitioner, and independent scholar with a BA from Wellesley College and MA in Sanskrit language and literature from the University of California, Berkeley. She is an authorized dharma teacher and has taught women’s spirituality with a focus on the sacred feminine and women’s stories for many years.

“A well-researched, intelligent, and sensitive retrieval of women’s lineage stories from the dawn of Buddhism.  Eloquently retold, with lush quotes from the canon, these accounts animate the poignant, intimate lives of the foremothers on their journey to enlightenment.  A welcome, much-needed addition to Buddhist literature!”—Judith Simmer-Brown, Naropa University, author of Dakini’s Warm Breath

“An extraordinary book, following the life span of the Buddha, as the great and brave women who brought equality to the dharma shine through rare and rich stories of their lives. This is a radical and wondrous book, shedding a new and bright light on Buddhism.”—Roshi Joan Halifax, Abbot, Upaya Zen Center

“An epic tale about the luminous constellation of women who from conception to death surrounded the Buddha. Straddling dream and reality, this fresh and original rendering of these remarkable women’s stories weaves together strands of legend with verses from original texts. The colorful accounts express in contemporary language and colloquial style the deepest spiritual longings of an awakening cast of characters, at once humorous, heartwarming, and familiar.”—Karma Lekshe Tsomo, editor of Buddhism through American Women’s Eyes and a founder of Sakyadhita: International Association of Buddhist Women

“Wendy Garling’s Stars at Dawn  retells the ancient stories of the lives of the women who were essential players in the Buddha's life in a way that supports connection and understanding. Reading Garling’s account of the women whose lives were interwoven with the Buddha’s, I often felt deeply inspired by everyone involved.”—Sharon Salzberg, author of Lovingkindness and Real Happiness

"Wendy Garling's Stars at Dawn is a beautiful telling of the moving stories of the many important women in the life of Siddhartha Gautama who became the Shakyamuni Buddha. Of course, human beings live totally interwoven with each other, and of course every man only can exist in dependence on many important women, grandmothers, mothers, sisters, lovers, wives, daughters, etc. Their bodies come from women, they are nurtured, protected, taught, and challenged by women, and their personalities are formed, and their insights and achievements are born from the usually more advanced realism of women. So finally, Garling shows us from mostly original sources how women had determining agency in creating the Buddhist movement on this planet in this era, skillfully helping us extricate ourselves from the patriarchal version where a lone man supposedly produced perfect enlightenment on his own and started a major transformation in history all alone. She has rendered us all, Buddhists and others, a great service; her book should be a must read in courses on Buddhism and by anyone who wants to understand the Buddha. All will benefit who wake up to recognize that human life and history have always been made by all too invisible women right along with the men we usually hear about! "—Robert Thurman, Je Tsongkhapa Professor of Indo-Tibetan Buddhist Studies, Columbia University

"Wendy Garling, in her book Stars at Dawn, has made an invaluable contribution to research in early Buddhism by collecting together a vast repository of stories from various early, and some late sources, and organizing them to argue for the significance and centrality of women in the life of the Buddha. In engaging in the painstaking work of tracking down these stories she has created a resource for future scholars who may well be spurred into inquiring into the deeper significance of this seemingly ‘hidden’ but certainly under researched textual tradition. What is offered is a significant and persuasive corrective to the dominant patriarchal story of the Buddha’s life, where women have been radically excised from that story and included only where they are deemed absolutely necessary, such as his ‘miraculous’ birth. This book is highly intelligent and extremely well researched and is one of those rare books that actually provokes thought, both agreement and disagreement. This is an absolute pleasure to read. "—Dr. John Peacock, Codirector of Masters in Mindfulness-based Cognitive Therapy, University of Oxford

"It is always good to reread old texts through new lenses. By focusing on often neglected stories about laywomen that have been sidelined in various traditions about the Buddha, Wendy Garling has produced a suggestive and insightful book. Instead of studying the biographical texts in the usual manner, from a philological, philosophical, or historical point of view, she seeks to knit together the forgotten threads of “women’s stories” within them, in ways that will be relevant to the concerns of present day readers and that will bring new insights to male-bound traditional narratives about the Buddha. Engagingly written, this is a work by someone who is herself a masterful storyteller. "—John Strong, Charles A. Dana Professor of Religion and Asian Studies, Bates College

"Buddhist storytelling embodies a vast and complicated web of narratives, and Wendy Garling’s book, Stars at Dawn, does a wonderful job of bringing some of it to life. She pulls together narratives from a number of early sources and presents fresh retellings of the most important female characters in the Buddha’s life. It is a wonderful accomplishment. "—Vanessa R. Sasson, Marianopolis College

“This excellent storytelling book makes a strong case for forgotten women [in the Buddha’s life], delivering accessible and well-conceived arguments that rightly re-center them in Buddhist discourse. . . . An accessible and well-researched book of [Buddhism’s early] women’s stories.”—Buddhistdoor

“[Garling] first unravels the androcentric and misogynistic knots in the fabric of the Buddha’s life story, and then reweaves a new narrative that highlights and honors the many roles women played in the early days of Buddhism. [Her] efforts to integrate these and other strong female characters add both tenderness and power to what has mainly been an all-male cast. If we follow Garling’s example and embrace these stories, we will inevitably create a more equal sangha.”—Tricycle

“Garling weaves often overlooked stories from all [Buddhist] traditions into a narrative that challenges readers to rethink gender equality in Buddhism and empowers women to reclaim their shared Buddhist heritage.”—Lion’s Roar

“A delightful experience to be immersed in the women’s half of the fourfold sangha.”—Alliance for Bhikkunis