The Hunter and Other Stories (CD-Audio) 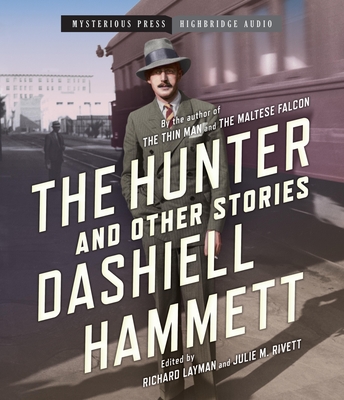 Dashiell Hammett is best known as both pioneer and master of American hard-boiled detective fiction, but these dozen and a half stories both affirm that reputation and present him in a different light. Along with the full-length screen treatments On the Make (which became the movie Mr. Dynamite, 1935) and The Kiss-Off (the basis for City Streets, starring Sylvia Sydney and Gary Cooper, 1931), this collection includes never before and rarely published stories that explore failed romance, courage in the face of uncertainty, hypocrisy, and crass opportunism.

Collected and edited by Hammett’s granddaughter, Julie Rivett, and noted Hammett scholar and biographer Richard Layman, The Hunter and Other Stories is a trove of priceless literary gems from an American master storyteller.

STEPHEN BOWLBY earned his BA in Speech & Theater at Westminster College in Pennsylvania, a short trip from his native North Jersey. His career quickly moved from commercial radio into television and film production as a writer, editor, and director with voice work ever present. With more than 35 years’ experience he’s expanded into audiobook performance, studying with such industry greats as Pat Fraley, Scott Brick, and Stefan Rudnicki.

DASHIELL HAMMETT was an American author of hard-boiled detective novels and short stories, screenplay writer, and political activist. He created enduring characters including Sam Spade (The Maltese Falcon), Nick and Nora Charles (The Thin Man), and the Continental Op (Red Harvest and The Dain Curse). He died in 1961 in New York City. As a veteran of two world wars, he is buried in Arlington Cemetery.

After working in the radio/production field for fifteen years, BRIAN HOLSOPPLE has been a full-time voiceover artist for well over a decade. In addition to audiobooks, he has done work for The Discovery Channel, the FBI, the US Army, and others. He is the voice of Thomas Jefferson in the official Park Service program at the Mount Rushmore National Monument.

DONNA POSTEL should have known the path she’d take by her first grade play. Instead of getting to play a duck or a tree, she was cast in the only speaking role, The Narrator. Fast forward to the present and we find Donna in her state-of-the-art studio where she has been happily talking to herself ever since. Her voice has been heard on hundreds of commercials and corporate narrations, recently expanding into audiobooks. When she’s not in the studio, Donna can be found down at the barn, cleaning up after, and occasionally riding, her horses.

Voice actor, writer, and musician RAY CHASE has provides the voices for major commercial campaigns such as Coke Zero, and Top Ten iPhone app successes. He began his career by reading aloud in the car for his mother and sister on the way to school. They didn’t seem to mind so much. He hopes you don’t either.

“Fans of crime writer Dashiell Hammett . . . have been waiting decades [for] the stories collected in this book.”
—Publishers Weekly

“Fans of Hammett’s gift for swiftly paced plotting and his ear for the languages of the day will be pleased to find much evidence of this in these stories.”
—Library Journal

“Rarely seen work from Hammett’s Hollywood years, in what may be the final cache of writing from the noir pioneer.”
—Shelf Awareness

“Fascinating finds to make the collection a must for fans of the great man.”
—Mystery Scene Magazine