We Are Pirates (Paperback) 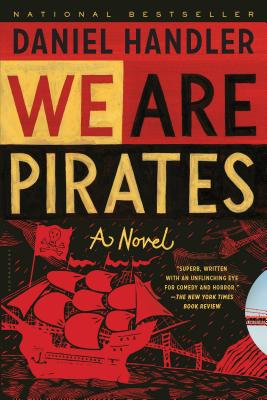 “From the mind behind Lemony Snicket comes this weird and wonderous novel, featuring a troubled teenage girl, her befuddled parents, an Alzheimer's-addled old man, and, of course, pirates. Handler plays it straight, until he doesn't, and demonstrates why he is one of the most playful, macabre, and beloved writers working today.”
— Cody Morrison, Square Books, Oxford, MS

A boat has gone missing. Goods have been stolen. There is blood in the water. It is the twenty-first century and a crew of pirates is terrorizing the San Francisco Bay.

Phil is a husband, a father, a struggling radio producer, and the owner of a large condo with a view of the water. But he'd like to be a rebel and a fortune hunter.

Gwen is his daughter. She's fourteen. She's a student, a swimmer, and a best friend. But she'd like to be an adventurer and an outlaw.

Phil teams up with his young, attractive assistant. They head for the open road, attending a conference to seal a deal.

Gwen teams up with a new, fierce friend and some restless souls. They head for the open sea, stealing a boat to hunt for treasure.

We Are Pirates is a novel about our desperate searches for happiness and freedom, about our wild journeys beyond the boundaries of our ordinary lives.

Also, it's about a teenage girl who pulls together a ragtag crew to commit mayhem in the San Francisco Bay, while her hapless father tries to get her home.

Daniel Handler is the author of the novels The Basic Eight, Watch Your Mouth, Adverbs, and Why We Broke Up. As Lemony Snicket, he is responsible for many books for children, including the thirteen-volume sequence A Series of Unfortunate Events and the four-book series All The Wrong Questions. He is married to the illustrator Lisa Brown, and lives with her and their son in San Francisco.

“A witty adult novel by Lemony Snicket author Daniel Handler . . . . Lemony Snicket's gothic humor lingers over this tale of upper-middle-class despair . . . [A] dark and whimsical novel . . . Yes, we are pirates, but we're chained on barren land. Has that theme ever been explored in such a weird mixture of impish wit and tender sympathy?” —Washington Post

“Honest and funny, dark and painful, We Are Pirates reads like the result of a nightmarish mating experiment between Joseph Heller and Captain Jack Sparrow. It's the strangest, most brilliant offering yet from the mind behind Lemony Snicket.” —Neil Gaiman

"We Are Pirates will dazzle, disturb, and delight you. It might even do things to you that don't start with the letter D, like remind you what it's like to be young, or convince you that Daniel Handler can do anything." - Jess Walter, #1 NEW YORK TIMES bestselling author of BEAUTIFUL RUINS

"There is no writer quite like Daniel Handler. Somehow he manages to work at the intersection of irony and wonderment, whimsy and menace--a space I'm not sure I knew existed until I read his work." - Jennifer Egan, author of A VISIT FROM THE GOON SQUAD

"Daniel Handler turns whimsy into wisdom and the fantastic into the great. He is, of course, a genius." - Lorrie Moore, author of A GATE AT THE STAIRS and BARK

"Daniel Handler [is] something like an American Nabokov." —Dave Eggers

"I loved it! We Are Pirates is extraordinary! It takes brand new shapes. And that prose is ruthless. Merciless. And then, the next second, it made me laugh out loud. Remarkable story, remarkable characters, remarkable prose. I'll carry that in my head forever." —Russell T. Davies

“Handler (aka children's author Lemony Snicket) has never been known for writing precisely happy novels, and his latest certainly doesn't deviate. What could easily have been a slightly silly, fantastical romp becomes, instead, in Handler's capable hands, a macabre, darkly human portrayal of family dynamics and growing up in a world running low on adventure . . . . peppered with black humor.” —Booklist

“If it's possible to be criminally underrated yet also be a millions-selling author, then Handler is it.” —The Huffington Post

“Handler is a master at depicting the existential chaos all his major characters are living through, and with warmth, sympathy and considerable humor at that. The reader will delight in Gwen and old Errol's escapades . . . Affecting, lively and expertly told. Just the sort of thing to make grown-ups and teenagers alike want to unfurl the black flag.” —Kirkus Reviews

“Can a couple of teenagers, a befuddled old man, and a nursing home orderly really steal a boat and wreak havoc in San Francisco harbor? Sure, says Handler, crossing and mixing genres--dark and light, YA yarn and midlife doldrum--while making readers root for his 20th-century privateers . . . A jaunty and occasionally jolting, and honest take on the discomforts of youth, midlife, and old age, and how ineffective we are at dealing with them. ” —Publishers Weekly

“Dark and hilarious . . . arresting. Daniel Handler . . . is a master of quiet suspense. What drives We Are Pirates is a current of love and Handler's strangely beautiful ability to show how even in a chaotic world, our lives have a way of converging if only we stop to notice.” —Elle

“Daniel Handler--aka Lemony Snicket--is one of the funniest people on the planet and his new novel is further evidence of his gift for offbeat, razor-sharp wit . . . We Are Pirates is high-flying fun and Gwen may be one of Handler's most endearing protagonists.” —San Jose Mercury News

“A tale that hovers somewhere between realism and fantasy. Full of sharp (and angry) observations about modern life, We Are Pirates is strange, dark and subversive.” —Financial Times

“Full of whimsy, adventure and intrigue. There are dastardly grown-ups and children in peril, moments of high camp and utter despair . . . Beneath all the trappings of make-believe and fancy dress, there is a poignant, serious story about a girl's need to find her true self, shackled to her desire to escape from the world--and the irreconcilable, sometimes bloody conflict between those two yearnings . . . The exhilarating sections dealing with this caper are the book's highlights, the prose full of high-blown pirate speak that does little to hide the sincerity of all those on deck.” —Daily Telegraph (UK)

“This, his fifth novel for adults, retains the whimsy, intrigue and high camp of his children's fiction . . . Silly but poignant. ****” —Sunday Telegraph (UK)

“Sails against readerly expectation to brilliant effect. Gloriously cut loose from much in the current book market, We Are Pirates is a pirate adventure for grown-ups set in modern-day San Francisco . . . It is a swashbuckling, wonderfully eccentric message in a bottle for those seeking a social order beyond the realm of traditional authority . . . Handler's yarn, replete with as many twists and turns as the classic pirate stories, captivates from start to finish, but it is his stylistic exploration of the piratical yen for elsewhere which most cleverly shanghais the imagination.” —The Independent on Sunday (UK)

"[Handler’s] latest novel is classic Snicket: escape at any cost . . . [But] something far odder, more chaotic--and distinctly adult--takes over . . . Handler switches timelines, settings and perspectives with the virtuosity of a plate-spinner." —The Guardian