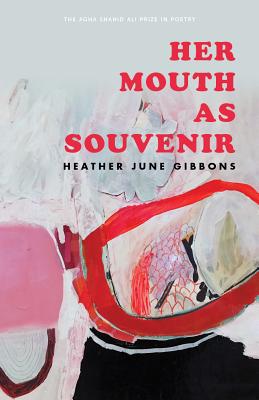 By Heather June Gibbons
$14.95
ON HAND in at least ONE of our stores. Click through or call for up-to-the-minute availability.

In a startling voice propelled by desire and desperation on the verge of laughter, these poems leap from the mundane to the sublime, from begging to bravado, from despair to reverie, revealing the power that comes from hanging on by a thread. Poet Heather June Gibbons conjures belief in the absence of faith, loneliness in the digital age, beauty in the face of absurdity—all through the cataract of her sunglasses’ cracked lens. In this debut collection, we are shown a world so turbulent, anxious, and beautiful, we know it must be ours. Under pressure, these poems sing.
Includes a foreword by Jericho Brown.

Heather June Gibbons was born in Utah and grew up on an island in Washington. She is the author of two chapbooks, Sore Songs and Flyover, and her poems have appeared widely in literary journals. A graduate of the Iowa Writers’ Workshop, she has received awards from the Fine Arts Work Center and the Vermont Studio Center. She lives in San Francisco, where she teaches creative writing at San Francisco State University and in the community.

“Not since Josh Bell’s No Planets Strike have I encountered an emerging poet's book that took the top of my head off with as sure a slice as Heather June Gibbon’s Her Mouth as Souvenir. Her language is wicked, syncopated and full of canny stings, with a quality of idiosyncratic consciousness that’s utterly contemporary. This is a singular collection, serving notice that Gibbons is a force with whom poetry readers will be thrilled to reckon.”
—Erin Belieu, author of Slant Six and Black Box

“Part garage-rock, part requiem, part power ballad, Gibbons' book is a whirling ‘study in loss.’ These pulsing poems sing, shout, and interrogate everything from desire to the digital age to a Midwestern waterpark, while luring us into their restless beauty, fervor, and humor. Spinning with silver suits and phosphorescent blooms, and attentive to the legerdemain of language, Her Mouth as Souvenir is both torch and torch singer as it shines its light into our mouths, illuminating us.”
—Simone Muench, author of Wolf Centos

”I love this book and the way it cries out in well-crafted poems that aren’t under the impression that craft has anything to do with boredom. Her Mouth as Souvenir is a declarative wonder, a testament to our need to go and go on.”
—Jericho Brown, author of The New Testament

“Gibbons is a poet who can make words turn at their heels, so that the ordinary comes to wrestle with the routine terror of the ungraspable.”
—The Spine

“Her Mouth as Souvenir is one of those rare debut collections that asks more questions than it answers, opens more doors than it closes; heck, it’s inventing doors along the way. . . . These poems manifest the pleasures of complexity, the sudsy riot of language: read us again, they beckon, as if anything could be understood entirely, as if a singular meaning was attainable—as if we could do anything but revel in the failures of the heart, the eyes, the ears, and the mind.”
—Southern Indiana Review

“A breathtaking and lyrical debut collection from Heather June Gibbons. Gibbons’ voice is a strong one, as she leads the reader through well-crafted and captivatingly honest free verse. Pressingly urgent and timely, Her Mouth as Souvenir is a study of action in the face of anxiety.”
—ZYZZYVA

“Heather June Gibbons’ debut collection is the literary equivalent of a carnival ride: it jolts, thrills, dizzies: you’ll step off windblown, with a little midway grit in your eye. The voice here feels relentlessly hectic, overwhelmed, a caffeinated oracle taking in and reporting on the signs and wonders of contemporary existence.”
—Tupelo Quarterly

“In a carefully crafted—and, I should note, extremely fun to read—study of the troubles and boredoms of contemporary life, Heather June Gibbons’s Her Mouth as Souvenir gives readers permission to keep falling down, to keep feeling sorry, to keep fumbling around in the dark.”—The Bind