I Love New York: Ingredients and Recipes [A Cookbook] (Hardcover) 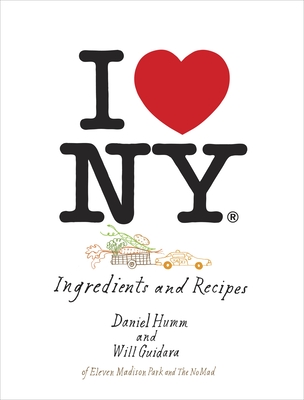 By Daniel Humm, Will Guidara, Francesco Tonelli (Photographs by)
Email or call for price
Not Available to Order. Call or email for used stock availability.

After landing rave reviews for their transformation of Eleven Madison Park from a French brasserie into a fine dining restaurant, chef Daniel Humm and general manager Will Guidara decided to refashion Manhattan’s ultimate destination restaurant into a showcase for New York’s food artisans. Instead of looking abroad for inspiration, Humm and Guidara headed to their own backyards, exploring more than fifty farms in the greater New York area and diving into the city’s rich culinary heritage as a cultural melting pot.

In I Love New York, Humm and Guidara present an in-depth look at the region’s centuries-old farming traditions along with nearly 150 recipes that highlight its outstanding ingredients—from apples, celery root, and foie gras to nettles, pork, scallops, and venison. Included among these dishes designed explicitly for the home cook are reinterpretations of New York classics, like Oyster Pan Roast, Manhattan Clam Chowder, and the Bloody Mary. Lushly illustrated with photographs of the area’s dramatic landscapes and the farmers who tend the land, this unique ode introduces the concept of New York regional cuisine as it celebrates the bounty of this exceptional state.

Hailing from Sleepy Hollow, New York, WILL GUIDARA has been immersed in the
restaurant industry since the age of thirteen. He is a graduate of the school of hotel administration at Cornell University and attended culinary school in the north of Spain. Guidara trained in the dining rooms of Tribeca Grill, Spago, and Tabla and opened the restaurants at the Museum of Modern Art before becoming the general manager of Eleven Madison Park in 2006.

FRANCESCO TONELLI is a photographer with a background as a professional chef, food stylist, and culinary professor. He has worked in the food industry in Italy, France, and Switzerland for more than twenty years and taught culinary arts at the Culinary Institute of America in Hyde Park, New York. His unique skill set and signature style have garnered a broad portfolio of clients that include the New York Times, Cooking Light, and Jean Georges. He is also the photographer of Eleven Madison Park: The Cookbook.

As an observer of the New York food scene for over fifty years, I have witnessed (and enjoyed) the constantly evolving landscape of this city’s cuisine. Never has a focus on New York, though, been more exciting than right now as Daniel Humm and his contemporaries skillfully interpret local ingredients and legendary classics. It should be no surprise that this book is as beautiful as it is enjoyable, and as delectable as it is inspiring, given the history of the authors in their restaurants. Their passion for New York and their loyalty to local suppliers of superb ingredients shows throughout the pages, as does the respect and inspiration Daniel Humm exhibits in everything he serves. The result of all of this is a wonderful cookbook full of subtly intriguing recipes that are well within the abilities of any halfway experienced home cook.
—Mimi Sheraton, food journalist and former restaurant critic of the New York Times and other publications