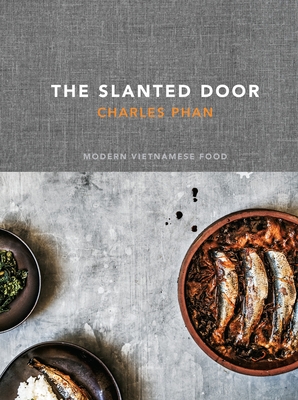 By Charles Phan
$40.00
ON HAND in at least ONE of our stores. Click through or call for up-to-the-minute availability.

Award-winning chef and restaurateur Charles Phan opened The Slanted Door in San Francisco in 1995, inspired by the food of his native Vietnam. Since then, The Slanted Door has grown into a world-class dining destination, and its accessible, modern take on classic Vietnamese dishes is beloved by diners, chefs, and critics alike. The Slanted Door is a love letter to the restaurant, its people, and its food. Featuring stories in addition to its most iconic recipes, The Slanted Door both celebrates a culinary institution and allows home cooks to recreate its excellence.

CHARLES PHAN is the executive chef and owner of The Slanted Door family of restaurants, and the author of IACP award-winning book, Vietnamese Home Cooking. He received the James Beard Award for Best Chef California in 2004, and in 2011, was inducted into the James Beard Foundation’s Who’s Who of Food in America. He lives in San Francisco with his wife and their three children.

“Each tantalizing recipe in The Slanted Door cookbook reminds me of a meal I’ve savored over the past fifteen years. In fact, I couldn’t stop smiling as I read this book! Thanks to Charles Phan, many of us have learned to love Vietnamese cooking through his lens—which is as authentically San Francisco as it is Vietnamese. All of the signature dishes from The Slanted Door are here, beckoning you to cook them, and best of all, you actually can.” –Danny Meyer, restaurateur and author of Setting the Table

“I have had more great meals at The Slanted Door than I can count. The cuisine has never failed to be reliably delicious. Charles Phan has brilliantly turned America on to the flavors of Vietnam and the genius of his thinking is laid out in this book.” –Rajat Parr, co-author of Secrets of the Sommeliers and wine director of the Mina Group