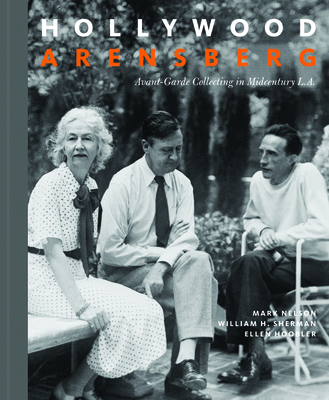 By Mark Nelson, William H. Sherman, Ellen Hoobler
$65.00
ON HAND in at least ONE of our stores. Click through or call for up-to-the-minute availability.

This comprehensive reconstruction and interpretation of Louise and Walter Arensberg’s groundbreaking collection of modern and pre-Columbian art takes readers room by room, wall by wall, object by object through the couple’s Los Angeles home in which their collection was displayed.

Following the Armory Show of 1913, Louise and Walter Arensberg began assembling one of the most important private collections of art in the United States, as well as the world’s largest private library of works by and about the philosopher Sir Francis Bacon. By the time Louise and Walter died—in 1953 and 1954, respectively—they had acquired some four thousand rare books and manuscripts and nearly one thousand works of art, including world-class specimens of Cubism, Surrealism, and Primitivism, the bulk of Marcel Duchamp’s oeuvre, and hundreds of pre-Columbian objects. These exceptional works filled nearly all available space in every room of their house—including the bathrooms.

The Arensbergs have long had a central role in the histories of Modernism and collecting, but images of their collection in situ have never been assembled or examined comprehensively until now. Presenting new research on how the Arensbergs acquired pre-Columbian art and featuring never-before-seen images, Hollywood Arensberg demonstrates the value of seeing the Arensbergs’ collection as part of a single vision, framed by a unique domestic space at the heart of Hollywood’s burgeoning artistic scene.

Mark Nelson is an author as well as design director and partner at the book design firm McCall Associates in New York.

William H. Sherman is director of the Warburg Institute in London.

Ellen Hoobler is the William B. Ziff, Jr., Associate Curator of the Art of the Americas at the Walters Art Museum in Baltimore.

"This beautifully illustrated book is not just the story of Walter and Louise Arensberg but also of New York and Los Angeles and their links to Mexico, Europe, and beyond in the first half of the 20th century. The Arensbergs, famed for their collections of modern art and the art of ancient Mexico, filled their homes with art, people, stories, and games. Using numerous photographs, architectural renderings, and compelling prose, Hollywood Arensberg takes the reader on an intimate tour of the Hollywood home, following a path through the house to delve deeply into the eccentric couple’s lives and collections, recreating the experience of the space and artworks and emphasizing the playfulness with which the Arensbergs imagined themselves as participants in the artworks and creators of a new one, their house as collection, which brought new meaning to each work, ancient or modern. The careful yet lively recounting of individual artworks’ biographies also gives insight into the works, their artists, and their journeys to the Arensbergs’ home, thereby connecting readers with fascinating worlds beyond the house, including those of artist studios, galleries, museums, and international art dealing and smuggling networks.”

“The authors of Hollywood Arensberg put into context the dozens of important modern masterworks that were displayed alongside non-Western—mainly pre-Columbian—art in the home of Walter and Louise Arensberg. The specific conversation between pre-Columbian objects and modern works by Duchamp, Picasso, Kandinsky, and others as experienced in the Arensberg home is a revelation. In this context of deep interchange between modern and pre-Columbian, Ellen Hoobler's essay examines the transformations in the Arensbergs' understanding of pre-Columbian form together with the effects of a burgeoning art market in Los Angeles after 1930 in what will be seen as a significant contribution to the history of pre-Columbian art collecting and its relation to modernism.”

“A rare and stimulating glimpse of a house and its collections, Hollywood Arensberg provides a deeper understanding of the acquisition and display practices of a resolutely avant-garde couple in the burgeoning art scene of midcentury Los Angeles. Nelson, Sherman, and Hoobler bring together aspects of the Arensbergs’ collecting practices previously considered separately, or not at all, such as their crucial and sustained interest in pre-Columbian sculpture. Nestled in the Hollywood Hills, the Arensberg home was filled with intentionally thought-provoking juxtapositions of ancient, historical, and modern art, and further enlivened by the many friends they entertained there, including Marcel Duchamp. The result is a richly textured look into a time and place when an embrace of modernism was a radical position.”

"Hollywood Arensberg is the most detailed and intimate portrayal of an art collection ever presented in book form. Louise and Walter Arensberg attended the Armory Show in 1913, an exhibition that transformed their lives, converting them into collectors of the most radical and vanguard art produced at the time. This continued after they moved to Los Angeles in the early 1920s. There, the Arensbergs began collecting pre-Columbian art, which they felt possessed an aesthetic that corresponded perfectly with their modern collection, all of which was dispersed throughout their home in Hollywood, California. With many detailed photographs and diagrams, this book provides a virtual tour through the collection, allowing readers to sense the excitement and exhilaration that was experienced by all visitors to the Arensbergs' home.”

“The world and the culture of mid-20th century Los Angeles is deeply enhanced by this book. It is remarkable—a complex, exciting read. Hollywood Arensberg is a foundational study for that thirty-year period from the 1920s to the postwar years and adds to our sense of the rehabilitative promise of early 20th-century Los Angeles. The authors are to be credited for the tone they have struck here: there’s none of that caricatured reflex we still see, that too-easy criticism that would make the Arensbergs sophisticates in a world of L.A. rubes. They note L.A.’s difficult relationship with modernist expression – fair enough – but they also take seriously the world the Arensbergs sought, and created, in their Los Angeles home.”

—William Deverell, Director, Huntington-USC Institute on California and the West

“Beyond being an awe-inspiring dive into the art holdings of the Arensbergs, the book offers a complex portrait of two people working to shape multiple fields.”
—Andrew Russeth, Architectural Digest


“An impressive cross-disciplinary and collaborative publication, imparting a great wealth of information while reckoning with the Arensbergs’ eccentric passions. . . . Hollywood Arensberg is an instant classic for a nascent field.”
—Robert McKenzie, PIN–UP Magazine


“A stunning photographic assemblage as immaculate and comprehensive as the famed art collection it seeks to reconstruct and interpret. . . . A thoughtfully guided tour via detailed stories and never-before-seen photographs.”

“A staggering, 430-page tome that documents how one of the most famous collecting couples lived with and displayed their art. While the dozens of floorplans and annotated diagrams are at first intimidating, they slowly draw the reader into a game of rediscovery. World-famous works of art suddenly appear in a completely new light, and the unexpected juxtapositions, created by the Arensbergs’ arrangement, set off a series of fascinating associations and new historical insights. . . . [The book] aims to offer a more complete picture of the collector couple and their legacy. It revisits the parts of their story that are well-known, such as their friendship with Duchamp and their impact on the New York art world in the 1910s. But it also strives to fill the many gaps in our understanding of the collectors’ interests and motivations, including their immersive and dynamic approach to displaying art and their impact on the L.A. art scene. By focusing on their life on the West Coast, the book is an important intervention in the standard account of modern art in the U.S., dislodging the primacy of New York and offering a more nuanced understanding of local, national, and transnational currents of exchange and influence. . . . Meticulously researched and generously illustrated with rarely seen photographs, Hollywood Arensberg offers us a beguiling glimpse of the house’s magic.”

“The Getty's marvelous new book reveals the extraordinary density and diversity of the Arensbergs' collection, unfolding as a kind of house tour in page after page of meticulously labeled black-and-white photographs. . . . It's instructive to see how the Arensbergs lived with some of the most avant-garde pieces of their day.”