The Problem of Increasing Human Energy: With Special Reference to the Harnessing of the Sun's Energy (Hardcover) 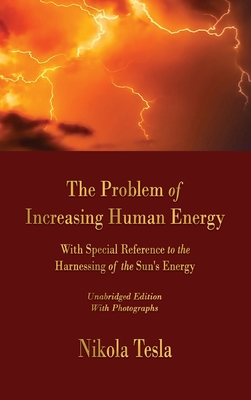 An Unabridged Edition of the original published by Century Illustrated Magazine to include, but not limited to: The Onward Movement of Man - The Energy of The Movement - The Three Ways of Increasing Human Energy - The First Problem - How to Increase the Human Mass - The Burning of Atmospheric Nitrogen - The Second Problem - How to Reduce the Force Retarding the Human Mass - The Art of Telautomatics - The Third Problem - How to Increase the Force Accelerating the Human Mass - The Harnessing of The Sun's Energy - The Source of Human Energy - The Three Ways of Drawing Energy from The Sun - Great Possibilities Offered by Iron for Increasing Human Performance - Enormous Waste in Iron Manufacture - Economical Production of Iron by A New Process - The Coming of Age of Aluminum - Doom of The Copper Industry - The Great Civilizing Potency of The New Metal - Efforts Toward Obtaining More Energy from Coal - The Electric Transmission - The Gas-Engine - The Cold-Coal Battery - Energy from The Medium - The Windmill and The Solar Engine - Motive Power from Terrestrial Heat - Electricity from Natural Sources - A Departure from Known Methods - Possibility of A "Self-Acting" Engine or Machine, Inanimate, Yet Capable, Like A Living Being, Of Deriving Energy from The Medium - The Ideal Way of Obtaining Motive Power - First Efforts to Produce the Self-Acting Engine - The Mechanical Oscillator - Work of Dewar and Linde - Liquid Air - Discovery of Unexpected Properties of The Atmosphere - Strange Experiments - Transmission of Electrical Energy Through One Wire Without Return - Transmission Through the Earth Without Any Wire - "Wireless" Telegraphy - The Secret of Tuning - Errors in The Hertzian Investigations - A Receiver of Wonderful Sensitiveness - Development of A New Principle - The Electrical Oscillator - Production of Immense Electrical Movements - The Earth Responds to Man - Interplanetary Communication Now Probable - Transmission of Electrical Energy to Any Distance Without Wires - Now Practicable - The Best Means of Increasing the Force Accelerating The Human Mass.