The Code: Football's Unwritten Rules and Its Ignore-At-Your-Own-Risk Code of Honor (Hardcover) 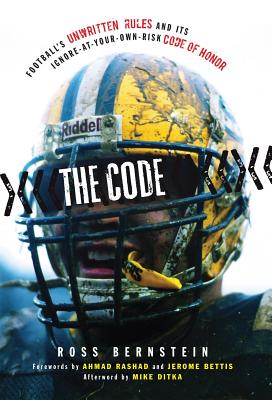 An in-depth and behind the scenes to explore the history of football's unspoken expectations of all who are involved with the game each Sunday, this engaging look the inner workings of the sport of football includes interviews with more than 100 current and former NFL players, coaches, front office employees and media personalities to examine how players go about their business on the field of play. They explain why various "rules" are expected among players and what tactics are used during games. This work discusses the top controversies on the gridiron, including the New England Patriots illegally taping the Jets defensive coaches' signals in 2007, wide receivers and defensive backs using stickum to help catch balls, offensive linemen using silicone to make it difficult for defensive players to grab their jersey, how Tony Mandarich beat steroid testing during his playing days, and Lawrence Taylor's career-ending hit on Joe Theismann on Monday Night Football in 1985. In addition to analyzing the reasons for controversial actions in football, Ross Bernstein elaborates further by covering the unspoken code of players, coaches, and even the referees.

Ross Bernstein is the bestselling author of 40 sports books and has appears frequently on local and national television and radio programs. His work has been featured on CNN, ESPN, the Wall Street Journal, and USA Today. As a sought-after motivational speaker, he speaks to corporations and groups across the country about the inspirational legacy of the late Herb Brooks, Hall of Fame coach of the fabled 1980 gold-medal-winning U.S. Olympic "Miracle on Ice" hockey team. He lives in Eagan, Minnesota. Ahmad Rashad is a professional sportscaster and a former NFL player. Jerome Bettis is a former NFL running back who is currently fifth on the NFL’s all-time rushing list. Mike Dika is a former NFL player and coach and sports broadcaster.