A Journey Round My Skull (Paperback) 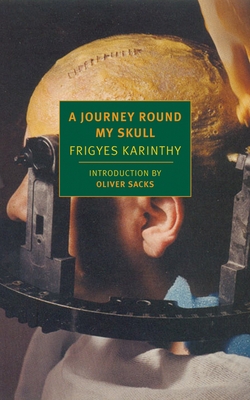 The distinguished Hungarian author Frigyes Karinthy was sitting in a Budapest café, wondering whether to write a long-planned monograph on modern man or a new play, when he was disturbed by the roaring—so loud as to drown out all other noises—of a passing train. Soon it was gone, only to be succeeded by another. And another. Strange, Karinthy thought, it had been years since Budapest had streetcars. Only then did he realize he was suffering from an auditory hallucination of extraordinary intensity.

What in fact Karinthy was suffering from was a brain tumor, not cancerous but hardly benign, though it was only much later—after spells of giddiness, fainting fits, friends remarking that his handwriting had altered, and books going blank before his eyes—that he consulted a doctor and embarked on a series of examinations that would lead to brain surgery. Karinthy’s description of his descent into illness and his observations of his symptoms, thoughts, and feelings, as well as of his friends’ and doctors’ varied responses to his predicament, are exact and engrossing and entirely free of self-pity. A Journey Round My Skull is not only an extraordinary piece of medical testimony, but a powerful work of literature—one that dances brilliantly on the edge of extinction.

Frigyes Karinthy (1887—1938) was a Hungarian author, playwright, poet, journalist, and translator. He was the first proponent of the six degrees of separation concept in his 1929 short story, L‡ncszemek (Chains). Karinthy is known in English for his novellas Voyage to Faremido and Capillaria. Father of Ferenc Karinthy, he remains one Hungary’s most popular writers.

Oliver Sacks practices neurology in New York City. His books include Awakenings, Uncle Tungsten, and The Man Who Mistook His Wife for a Hat.

"Karinthy’s book is, to my mind, a masterpiece. We are inundated now with medical memoirs, both biographical and autobiographical–the entire genre has exploded in the last twenty years. Yet even though the technology may have changed, the human experience has not, and Journey Around My Skull, the first autobiographical description of a journey inside the brain, remains one of the very best.” --Oliver Sacks (from the Introduction)

“The first patient’s-eye-view account of a brain operation in medical history…remarkable.” –Time

“The London Evening Standard called A Journey Round My Skull…an extraordinary book. The New Statesman and Nation called it a very remarkable book. The Spectator an unusual and extremely interesting book. The Glasgow Herald a terrible and marvelous book. The British Medical Journal a book of the highest value. This chorus of praise is not too strong…A Journey Round My Skull is a document that few other men would have written and that no reader will easily forget.” –The New York Times

“Here is a book of surpassing interest and power…Written with utmost clarity and candor, Karinthy’s account of his illness and operation is a compelling, unique achievement which needs no artifice…the patient’s narrative holds the reader in a spell.” –Los Angeles Times

“Pirandello could not have written it better…a triumph of writing, a very remarkable book.” –The New Statesman

“It would be impossible to read anything so moving, so frightening or so exciting…a terrible and marvelous book. It will be treasured by the courageous reader for its beauty, its poetry and its revelation of an experience that happily comes to few men.” –John O’London’s Weekly

“A remarkable subject, and the book is as remarkable as its subject. Not a touch of morbidity adheres to the story…indeed an extraordinary book.” –The Evening Standard

“This unusual and extremely interesting book…as well as being a brilliantly imaginative record of an illness, the book is also a very revealing autobiography.”–The Spectator

"Karinthy was a magnificent parodist and a ruthless but never pompous social critic. His poetry was a mixture of carefully polished, effectively classicist and broadly-rolling, Whitmanesque verse." –Adam Makkai

“Karinthy gives a minute description of his ‘skull,’ a description that covers both the physical and psychological…but he also incorporates his readings (Thomas Mann’s Joseph and his Brethern, Scott’s account of his journeys to the South Pole, Jules Verne’s Michel Strogoff) and a variety of philosophical musings…What a pleasure to sit down with a witty, urbane, eminently well educated human being, to bask in his presence as he recounts to you something of vital importance to him. We could do with a few more Karinthys nowadays.” –The Hungarian Quarterly

A “brilliant humorist and prose-writer.” –The Independent [UK]

“[Karinthy] possesses the sharp and biting satire of Voltaire; the provocative doubt of Shaw; the poetic fantasy of Maeterlinck. Karinthy is a universal literary genius: playwright, humorist, poet, novelist, critic, essayist, literary caricaturist, etc…He has that rare ability of our own Charlie Chaplin, in that whatever he attempts to do, he can make us feel that he is a genius.” –Los Angeles Times

“This book is both a human document and a piece of authentic literature, not devoid of humor.” –The New York Times