Animal Viruses and Humans, a Narrow Divide: How Lethal Zoonotic Viruses Spill Over and Threaten Us (Paperback) 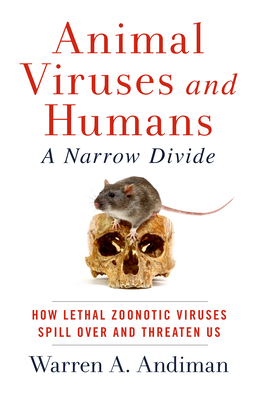 Gripping stories, filled with details that are in equal part delicious and disgusting, but always fascinating.--Lisa Sanders, MD, author of Every Patient Tells a Story and the New York Times Magazine Diagnosis column

"To reproduce promiscuously and to wreak havoc wherever they can find a home," this is the sole raison d' tre of viruses writes Dr. Warren Andiman, an HIV/AIDS researcher who has been on the front lines battling infectious diseases for over forty years. In Animal Viruses and Humans: A Narrow Divide, Andiman traces the history of eight zoonotic viruses --deadly microbes that have made the leap directly from animals to human populations: Middle East Respiratory Syndrome (MERS), Swine influenza, Hantavirus, Monkeypox, Severe Acute Respiratory Syndrome (SARS), Rabies, Ebola, and Henipaviruses (Nipah and Hendra). He also illustrates the labor intensive and fascinating detective work that infectious disease specialists must do to uncover the source of an outbreak.

Andiman also looks to the future, envisioning the effects on zoonoses (diseases caused by zoonotic viruses) of climate change, microenvironmental damage, population shifts, and globalization. He reveals the steps that we can, and must, take to stem the spread of animal viruses, explaining, "The zoonoses I've chosen to write about . . . are meant to describe only a small sample of what is already out there but, more menacingly, what is inevitably on its way, in forms we can only imagine."

Warren Andiman, MD is professor emeritus of pediatrics and epidemiology at the Yale Schools of Medicine and Public Health.

Dr. Warren Andiman is Professor emeritus of pediatrics and epidemiology at the Yale Schools of Medicine and Public Health. He received his medical degree from Albert Einstein College of Medicine in New York and completed his pediatric residency at Babies Hospital, part of the former Columbia-Presbyterian Medical Center. After serving a two-year stint as a Captain in the U.S. Army Medical Corps, he pursued a post-doctoral fellowship in pediatric infectious diseases at the Yale School of Medicine and joined the faculty on which he served for forty-two years.At the start of the AIDS epidemic Dr. Andiman, with his associates, created the Pediatric AIDS Care Program at Yale-New Haven Hospital and served as its medical director for thirty-two years. He lives in Connecticut with his wife, also a pediatrician. They have two daughters.