The Lindbergh Kidnapping Suspect No. 1: The Man Who Got Away (Paperback) 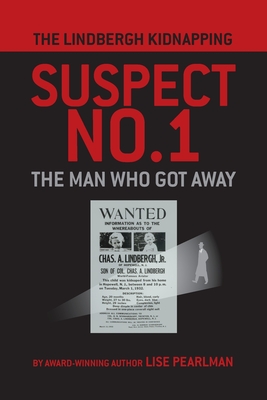 By Lise Pearlman
$29.95
NOT on our shelves now. Usually ships from warehouse in several days.

Astonishingly more key evidence is accessible today than was presented at the death penalty trial of Bruno Richard Hauptmann for the kidnap/murder of Charles Lindbergh, Jr. Viewing documents and photos that the jury never saw and forensic analysis never before published, you get to judge for yourself who committed the "crime of the century." Experts and enthusiasts alike are calling award-winning author Lise Pearlman's shocking new expos on the Lindbergh kidnapping:

This shocking but true story is told in just 350 pages divided into dozens of short, riveting chapters you can't put down. Bonus features include:

-- the May 1932 forensic report issued by the premiere medical lab now known as Bristol Myers Squibb.

-- 60+ pages of detailed endnotes for armchair detectives and curious readers

-- source list of over 90+ books, archives and other reference materials

In the depths of the Depression, millions worldwide followed every twist and turn of the Lindbergh baby kidnap/murder. Yet what was reported was largely fake news. Nearly a century after undocumented immigrant Bruno Richard Hauptmann was executed for the dastardly crime, questions still linger. If the wrong man was convicted, who did it? When? Why? Where? How? The shocking answers this book suggests have eluded all prior authors. Extensive research into dusty archives yielded crucial forensic evidence never before analyzed. Readers are invited to reexamine "the crime of the century" with fresh eyes focused on a key suspect - a slim man wearing a fedora that obscured his face. He was spotted with a ladder in his car near the Lindberghs' driveway early that fateful night. The police let an insider who fit that description oversee the entire investigation - the boy's father, international hero Charles Lindbergh. Abuse of power, amorality and xenophobia all feature in this saga set in an era dominated by white supremacists and social Darwinists. If Lindbergh was Suspect No. 1, the man who got away, what was his motive? Who else was involved? Who helped cover up the crime?

Read this book and judge for yourself.