Encore: Finding Work that Matters in the Second Half of Life (Paperback) 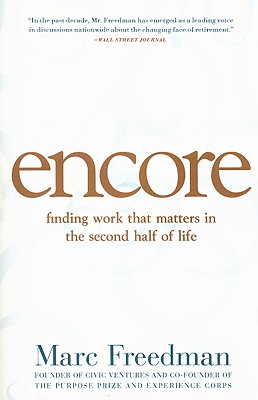 By Marc Freedman
$16.99
NOT on our shelves now. Usually ships from warehouse in several days.

In one of the most significant social trends of the new century, and the biggest transformation of the American workforce since the women's movement, members of the baby boom generation are inventing a new phase of work.

Encore tells the stories of encore career pioneers who are not content, or affluent enough, to spend their next thirty years on a golf course. These men and women are moving beyond midlife careers yet refusing to phase out or fade away. As they search for a calling in the second half of life and focus on what matters most, these individuals stand to transform the nature of work in America. They also hold the potential to create a society that balances the joys and responsibilities of contribution across the generations -- in other words, one that works better for all of us.

Marc Freedman is CEO and president of Encore.org, an organization he founded in 1998. Freedman is a member of the Wall Street Journal's "Experts" group, a frequent commentator in the national media, and the author of four previous books.

Originator of the encore career idea linking second acts to the greater good, Freedman cofounded Experience Corps to mobilize people over fifty to improve the school performance and prospects of low-income elementary school students in twenty-two US cities. He also spearheaded the creation of the Encore Fellowships program, a one-year fellowship helping individuals translate their midlife skills into second acts focused on social impact, and the Purpose Prize, an annual $100,000 prize for social entrepreneurs in the second half of life. (AARP now runs both Experience Corps and the Purpose Prize.)

Freedman was named Social Entrepreneur of the Year by the World Economic Forum and the Schwab Foundation, was recognized as one of the nation's leading social entrepreneurs by Fast Company magazine three years in a row, and has been honored with the Skoll Award for Social Entrepreneurship. He has been a visiting fellow at Stanford University, the David and Lucile Packard Foundation, and King's College, University of London. Freedman serves or has served on the boards and advisory councils of numerous groups, including the George Warren Brown School of Social Work at Washington University in St. Louis, the Stanford University Distinguished Careers Institute, the Milken Institute's Center for the Future of Aging, and the EnCorps STEM Teachers Program.

A high honors graduate of Swarthmore College, with an MBA from the Yale School of Management, Freedman lives in the San Francisco Bay area with his wife, Leslie Gray, and their three sons.