A Question of Freedom: A Memoir of Learning, Survival, and Coming of Age in Prison (Paperback) 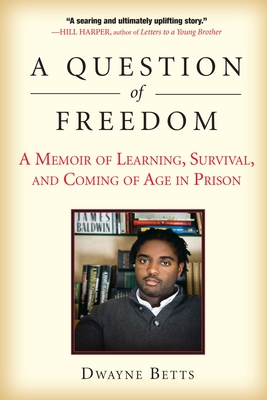 At the age of sixteen, R. Dwayne Betts-a good student from a lower- middle-class family-carjacked a man with a friend. He had never held a gun before, but within a matter of minutes he had committed six felonies. In Virginia, carjacking is a "certifiable" offense, meaning that Betts would be treated as an adult under state law. A bright young kid, he served his nine-year sentence as part of the adult population in some of the worst prisons in the state.

A Question of Freedom chronicles Betts's years in prison, reflecting back on his crime and looking ahead to how his experiences and the books he discovered while incarcerated would define him. Utterly alone, Betts confronts profound questions about violence, freedom, crime, race, and the justice system. Confined by cinder-block walls and barbed wire, he discovers the power of language through books, poetry, and his own pen. Above all, A Question of Freedom is about a quest for identity-one that guarantees Betts's survival in a hostile environment and that incorporates an understanding of how his own past led to the moment of his crime.

Reginald Dwayne Betts is a poet and a lawyer. He created Freedom Reads, an initiative to curate microlibraries and install them in prisons across the country. His latest collection of poetry, “Felon,” explores the post-incarceration experience. His 2018 article in The New York Times Magazine about his journey from teenage carjacker to working lawyer won a National Magazine Award.

“A Question of Freedom is a must-read and should be required reading for all those young sons and grandsons and brothers and nephews and uncles who believe this can't happen to them; it can, even if they can't wrap their brains around such a concept.”—The Baltimore Times

“Betts did not use his almost-a-decade experience behind bars as an excuse to become bitter and angry about his life. He instead used it to strengthen his mind and develop his love for books, literature and poetry. [He] writes candidly about his experiences as a juvenile offender in an adult system.”—Afro-American Times

"Dwayne Betts was incarcerated for 10 years in an unforgiving place -- a place in which he also discovered the incredible power of books and reading. He's written his own life-changing book, which may well prevent other young men from making that detour to prison. A searing and ultimately uplifting story."
-Hill Harper, author of Letters to a Young Brother

"I'm so happy to have been introduced to the miracle that is R. Dwayne Betts' A Question of Freedom. It tells so many important stories: of senseless violence that plagues our streets, the devastating affect our prison system is having on so many young African-American males and the struggles we must all experience before we can find redemption. But perhaps most importantly, it's a story about the power of consciousness. A reminder that no matter how confining our surroundings might seem or how bleak our future might look, as long as we are in touch with our higher selves, we can always tap into both the compassion and the toughness that is in all of our hearts. Betts is a major new voice in hip-hop and I look forward to being inspired by him for years to come."
-Russell Simmons, author of Do You: 12 Laws to Access the Power in You to Achieve Happiness and Success

"This book is a lesson on living. How does one become a man after being in a cell? A Question of Freedom is not a book of answers. Instead, this memoir is a minder that a black boy can turn his world around. Betts shows us that words are key. This book will unlock your compassion."
-E. Ethelbert Miller, Director of the African American Resource Center, Howard University

"At last, a clear defining voice to express the feelings and hardships of so many young black boys trapped in America's prisons. A survivor among the countless lost souls, Dwayne loudly demands to be heard--in a soft and honest tone. A magnificent journey!"
-Louise Ferrante, author of Unlocked: The Life and Crimes of a Mafia Insider