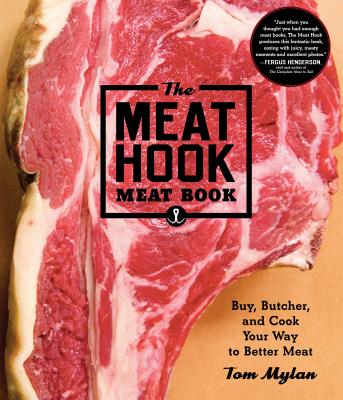 Buying large, unbutchered pieces of meat from a local farm or butcher shop means knowing where and how your food was raised, and getting meat that is more reasonably priced. It means getting what you want, not just what a grocery store puts out for sale—and tailoring your cuts to what you want to cook, not the other way around. For the average cook ready to take on the challenge, The Meat Hook Meat Book is the perfect guide: equal parts cookbook and butchering handbook, it will open readers up to a whole new world—start by cutting up a chicken, and soon you’ll be breaking down an entire pig, creating your own custom burger blends, and throwing a legendary barbecue (hint: it will include The Man Steak—the be-all and end-all of grilling one-upmanship—and a cooler full of ice-cold cheap beer).

This first cookbook from meat maven Tom Mylan, co-owner of The Meat Hook, in Williamsburg, Brooklyn, is filled with more than 60 recipes and hundreds of photographs and clever illustrations to make the average cook a butchering enthusiast. With stories that capture the Meat Hook experience, even those who haven’t shopped there will become fans.

Tom Mylan is the executive chef and co-owner of The Meat Hook. Opened in 2009, The Meat Hook is a local, sustainable butcher shop housed in the popular Brooklyn Kitchen, the largest cooking school for home cooks in New York City. A leading force in the national obsession with meat, butchers, and butchering, Tom has contributed recipes and stories to Food & Wine, Gilt Taste, and Gourmet and has appeared on Anthony Bourdain’s No Reservations. Chow.com called him one of the 13 most important people in food in 2010, and New York magazine honored him as one of the “Curators of New Brooklyn.” He met his wife, Annaliese Griffin, when they both worked at Murray’s Cheese. They live in Brooklyn.

“A butchery book you’ll actually use.”

“Delivers everything you need to know about cutting and cooking meat.”
—Martha Stewart Living

“The Meat Hook Meat Book really stands out amongst a sea of other meat-centric books out there.”
—Playboy.com

“There are some things all men should know . . . let butcher Tom Mylan of the Meat Hook in Williamsburg, Brooklyn, be your guide to these meaty topics and more.”
—Tasting Table

“Just when you thought you had enough meat books, The Meat Hook produces this fantastic book, oozing with juicy, meaty moments and excellent photos.”
—Fergus Henderson, chef and author of The Complete Nose to Tail

“The Meat Hook Meat Book combines good storytelling and great technique from an originator of Brooklyn’s young and electric food scene, and the creator of something much better than a store—a community with rowdiness and heart.”
—Ted Allen, host, Food Network’s Chopped