The Key of Solomon the King: Clavicula Salomonis (Paperback) 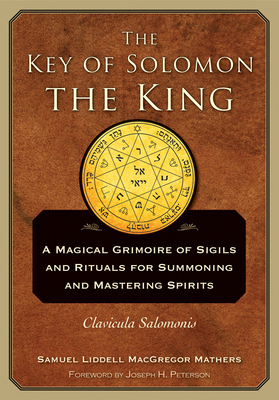 A magical grimoire of sigils and rituals for summoning and mastering spirits, The Key of Solomon the King is the most famous, or infamous, of all magick books. It has influenced everything from the revival of magick and the Western Mystery Traditions (tarot, alchemy, astrology, etc.) to fictional works such as Lovecraft's The Necronomicon.

Purported to have been penned by King Solomon himself, the book provides instruction for incantations, rituals, and sigils used to call upon and control spirits and demons. Those practicing magick have used it extensively through the centuries, but its true origins and purpose have been lost in the mists of time.

No library of the contemporary occult student or practicing magician is complete without this tome. It remains a standard of esoteric lore by which others are measured. This edition includes a new foreword by noted esoteric scholar Joseph Peterson.

S. L. MacGregor Mathers (1854-1918) was a prominent scholar and leader of the occult movement in Britian at the turn of the century. A lifelong fascination with mysticism and Celtic symbolism led Mathers to hold high office in the Rosicrucian Society of England, and eventually to become a founder of the Hermetic Order of the Golden Dawn. He is also well known for having been a key tutor to Aleister Crowley.

Joseph H. Peterson has translated many esoteric and religious source works including The Clavis or Key to the Magic of Solomon, Arbatel, and John Dee’s Five Books of Mystery. Peterson is an active member of the American Academy of Religion and the American Folklore Society. He has an extensive collection of rare esoteric documents, which he shares at his award-winning websites esotericarchives.com and avesta.org. He lives near Rochester Minnesota.