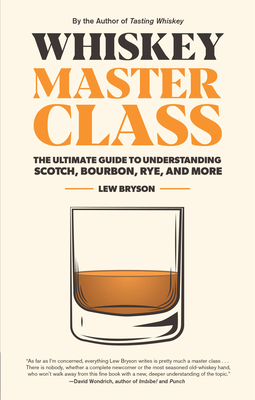 Go beyond the glass and discover the secrets behind your favorite style of whiskey.

Over the past three decades, Lew Bryson has been one of the most influential voices in whiskey—a longtime editor of Whisky Advocate and author of the definitive guide Tasting Whiskey. In this book, Lew shares everything he's learned on his journey through the worlds of bourbon, Scotch, rye, Japanese whiskey, and more (yes, there are tasty Canadian and Irish whiskeys as well!). In this book, you'll find it all:Every chapter contains a variety of unique, often behind-the-scenes photography. And with whiskey as the subject, this is a class where you'll want to do the homework!

Lew Bryson has been writing about beer and spirits full-time since 1995. He was the managing editor of Whisky Advocate from 1996 through 2015. He is currently a Senior Drinks Writer for the Daily Beast, and also writes for ScotchWhisky.com, Artisan Spirit, and Bourbon+.

Bryson is the author of Whiskey Master Class as well as Tasting Whiskey. He has also written four regional brewery guidebooks from Stackpole Books: Pennsylvania Breweries; New York Breweries; Virginia, Maryland & Delaware Breweries; and New Jersey Breweries (with Mark Haynie). He was selected as the 2008 winner of the Michael Jackson Beer Journalism Award (Trade and Specialty Beer Media). He has served as a judge for both the American Craft Spirits Association and the Great American Beer Festival.

Lew Bryson lives north of Philadelphia with his wife and two Welsh Corgis.

"Tasting Whiskey is both accessible to novices and compelling for the expert."
— Wine Spirits

"Whether you're a novice drinker or a malt connoisseur, Bryson has something to teach you — and you'll enjoy every word."
— Clay Risen, author of American Whiskey, Bourbon and Rye


“Let’s just say that there is nobody, whether a complete newcomer or the most seasoned old-whiskey hand, who won’t walk away from this fine book with a new, deeper understanding of the topic.”
—David Wondrich, author of Imbibe! and Punch

“Lew Bryson knows more about whiskey than anyone I’ve met. But that’s only one reason to read Whiskey Master Class. He writes with clarity and humor in a way that will engage novices and connoisseurs alike.”
—Clay Risen, author of Single Malt: A Guide to the Whiskies of Scotland

“Lew writes about whiskey the same way our family is proud to make whiskey—with honesty, craft, and a lot of heart. Whether you’ve been a whiskey fan for years or just getting into it, you’ll learn something new from Lew’s explanation of making whiskey. And damn sure you’ll have some fun while doing it.”—Fred Noe, Beam Seventh Generation Master Distiller

“In whiskey, Lew Bryson is not only a god, he is a hero. With this book, he’ll grow the base of whiskey knowledge and will help eliminate know-it-all know nothings.”—Fred Minnick, editor-in-chief of Bourbon+; author of Bourbon and Bourbon Curious

“Lew uses a cozy, conversational style of writing that makes the reader feel as if they are sitting in front of a quiet fire with an old friend, enjoying the perfect dram. It belies his decades of experience of writing on all things beer and whiskey, and makes Lew’s technical explanations feel less like an impenetrable fog of science and more like a welcome footnote. This is a must have for anyone looking to enjoy whiskey just a little bit more.”—Todd Leopold, Leopold Bros. Distillery & Malthouse

“Like all great educators, Lew wears his knowledge modestly and dispenses his deep wisdom with a deceptively light touch. He is one of the great voices in the whiskey world. Listen to it.”—Dave Broom, author of The World Atlas of Whisky

“Lew is a true whiskey guy. To enhance your knowledge in the magical world of distilling, my friend Lew Bryson is the perfect place to start. His many years in the whiskey business and his insatiable thirst for knowledge ensures his fans and readers continue to gain great insights and understanding. Lew makes drinking good whiskey great!”—Colum Egan, Master Distiller Bushmills Irish Whiskey