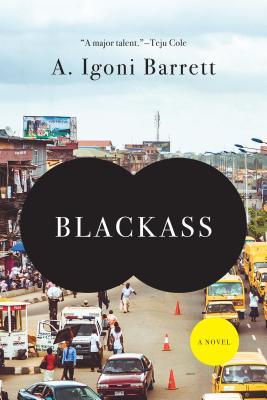 “We have seen transformation handled masterfully in literature, and Blackass, with its black, Nigerian protagonist waking up in the body of a white man, immediately calls to mind Kafka's Metamorphosis. But this is something more, something different. There is a willingness here to confront how we create our identities -- racially, politically, and even on social media. Barrett does this with intelligence and a playful humor that is by turns bright and biting. There is an edge to Blackass, a fire, the beginning of trouble. This is Kafka for the Kanye generation.”
— Kenny Coble, King's Books, Inc., Tacoma, WA

Furo Wariboko, a young Nigerian, awakes the morning before a job interview to find that he's been transformed into a white man. In this condition he plunges into the bustle of Lagos to make his fortune. With his red hair, green eyes, and pale skin, it seems he's been completely changed. Well, almost. There is the matter of his family, his accent, his name. Oh, and his black ass. Furo must quickly learn to navigate a world made unfamiliar and deal with those who would use him for their own purposes. Taken in by a young woman called Syreeta and pursued by a writer named Igoni, Furo lands his first-ever job, adopts a new name, and soon finds himself evolving in unanticipated ways.

A. Igoni Barrett's Blackass is a fierce comic satire that touches on everything from race to social media while at the same time questioning the values society places on us simply by virtue of the way we look. As he did in Love Is Power, or Something Like That, Barrett brilliantly depicts life in contemporary Nigeria and details the double-dealing and code-switching that are implicit in everyday business. But it's Furo's search for an identity--one deeper than skin--that leads to the final unraveling of his own carefully constructed story.

*One of Buzzfeed’s Most Exciting Books of 2016*

“[Blackass] vividly captures the frenetic energy of one of the world’s ­fastest-growing cities and provides a perceptive and engaging meditation on the mutability — and the stubborn persistence — of identity.”—The New York Times Book Review

“In a sharp twist on Kafka’s Metamorphosis, Barrett’s novel opens with the protagonist waking up one morning in Lagos to realize he’s been transformed—into a white man. A searing, provocative satire ensues.”—Huffington Post, “32 New Books to Add To Your Shelf in 2016”

“[Barrett’s] dizzying tragicomic odyssey paints a vivid portrait of the social and economic complexities of a modern megacity.”—The Millions

“Brilliant . . . Blackass is an insightful commentary on race, identity, and modern-day Nigeria.”—Buzzfeed

“[In Blackass] Lagos functions as another character in the book, a fascinating and chaotic megacity populated by people trying to move up in the world. . . . Barrett’s debut novel is an original take on both metamorphosis and The Metamorphosis.”—Publishers Weekly

“A. Igoni Barrett’s stunning debut novel, Blackass, provokes laughter, tears, guilt, and rage as it plumbs the depths of racist and sexist attitudes. . . . Barrett’s fresh and irreverent voice demands to be heard—not only via his creative first novel, Blackass, but, one hopes, again and again, as this exciting young author spins new tales to awaken the conscience through biting social commentary made palatable by humor.”—Foreword Reviews

“Barrett’s prose is consistently entertaining. . . . Readers in search of an incisive observer of contemporary life will find one in Barrett.”—Kirkus Reviews

“A brilliant vantage point from which to take on racial commentary. It is a necessary conversation. It is timely. . . . Here is an ambitious, sophisticated novel, careful in its construction and secure in its cleverness.”—The Root

“By the time it comes to its unsettling conclusion, Blackass has itself metamorphosed into an . . . affecting social novel, yes, but also set of fateful contradictions about a mad world forcefully and originally seen through to the end.”—Flavorwire

“Lyrical and inventive . . . a testament to Barrett’s imaginative power. . . . It’s no surprise Barrett has created such a fascinating, good-hearted character in his first, funny, poignant, clever novel.”—Chicago Review of Books

“With this hilarious, nail-pointed satire, a devastating social parable brimming with humanity and heart, Barrett joins the ranks of the great tricksters: Alain Mabanckou, Joseph Heller, and Charles Johnson.”—Marlon James

“Blackass is a novel of hallucinatory brilliance: a reworking of Kafka’s Metamorphosis that feels as unbearably real to us today as the original did in its time. Very few novels have ever come this close to capturing how we inhabit our racial selves, and the mingled terror and fascination we feel at the idea of inhabiting another body. It’s a light, fleet-flooted, playful, thoroughly enjoyable book, but be careful: it will scorch your fingers and singe your eyelashes.”—Jess Row, author of Your Face in Mine

“Barrett’s writing is alive: the images, the characters, their movements, their mannerisms—everything—so visual, I felt as if I were walking the same streets as Furo, navigating Lagos alongside him. But don’t let the Lagos setting fool you. This novel is full of universal sociocultural truths that extend far beyond its Nigerian setting. The best thing about it? The lightheartedness of the writing; the captivating sense of humor. But Blackass is also a serious book, the best kind of serious: Honest and unflinching, it is a political satire that invites us to rethink the way our world works.”—Chinelo Okparanta, author of Happiness, Like Water

“I spent one of the best afternoons in recent memory on the brink of tears and about to bolt from my seat in anxious laughter reading Blackass. . . . A triumph for Nigeria, and for Nigeria in the world.”—Binyavanga Wainaina

“A dazzling first novel by one of Africa’s best young writers.”—The Times(UK)

“An inventive and playful take on power and identity in modern Nigeria.”—The Irish Times