The Scent of Pomegranates and Rose Water: Reviving the Beautiful Food Traditions of Syria (Hardcover) 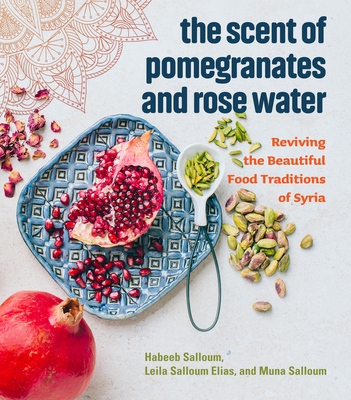 By Habeeb Salloum, Leila Salloum Elias, Muna Salloum
$29.95
NOT on our shelves now. Usually ships from warehouse in several days.

The traditions of Syrian cooking go back hundreds of years, and is notable for its sensory components, in which aroma and texture are as important as taste and nutrition. Over the centuries, the unique dishes of Greater Syria (bilaad al-shaam) were preserved by those who cooked them. For cooks in imperial households, family homes, or on simple peasant farms, recipes were handed down from generation to generation. Despite centuries of occupation, unrest, economic hardships, and political strife, the people of Greater Syria continued to cook their burghul, lentil, chickpeas, kishk, and yogurt dishes as if life around them never changed. Syrian-born Habeeb Salloum and his daughters Leila Salloum Elias and Muna Salloum have researched and explored the far reaches of Syrian cuisine for many years (and in Habeeb's case, decades). Their resulting cookbook, Pomegranate and Rose Water, provides a succinct window into the dining tables of eighteenth and nineteenth-century Syria, featuring many delectable, heart-healthy recipes that have never before been published in English. The book also provides a poignant window into Syrian culture and everyday life then and now--bound together by ageless and truly beautiful food traditions. Partial proceeds from the sale of this book will benefit the Syrian Cultural Centre, a Montreal-based non-profit organization dedicated to help alleviate the plight of the displaced and those who have been impacted by the current situation in Syria. Includes 144 recipes; full-color throughout.

Habeeb Salloum was born in the Qaroum area of Syria (now part of modern Lebanon) who emigrated to Canada with his family. A veteran of the Royal Canadian Air Force during World War II, for the last 30 years he has been a full-time writer specializing in food, history, and travel.