The Master: The Long Run and Beautiful Game of Roger Federer (Compact Disc) 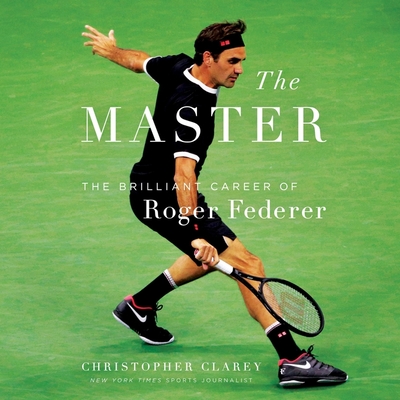 A major biography of the greatest men's tennis player of the modern era.

There have been other biographies of Roger Federer, but never one with this kind of access to the man himself, his support team, and the most prominent figures in the game, including such rivals as Rafael Nadal, Novak Djokovic, and Andy Roddick. In THE MASTER, New York Times correspondent Christopher Clarey sits down with Federer and those closest to him to tell the story of the greatest player in men's tennis.Roger Federer has often made it look astonishingly easy through the decades: carving backhands, gliding to forehands, leaping for overheads and, in his most gravity-defying act, remaining high on a pedestal in a world of sports rightfully flooded with cynicism. But his path from temperamental, bleach-blond teenager with dubious style sense to one of the greatest, most self-possessed and elegant of competitors has been a long-running act of will, not destiny. He not only had a great gift. He had grit.Christopher Clarey, one of the top international sportswriters working today, has covered Federer since the beginning of his professional career. He was in Paris on the Suzanne Lenglen Court for Federer's first Grand Slam match and has interviewed him exclusively more than any other journalist since his rise to prominence. Here, Clarey focuses on the pivotal people, places, and moments in Federer's long and rich career: reporting from South Africa, South America, the Middle East, four Grand Slam tournaments, and Federer's native Switzerland. It has been a journey like no other player's, rife with victories and a few crushing defeats, one that has redefined enduring excellence and made Federer a sentimental favorite worldwide.THE MASTER tells the story of Federer's life and career on both an intimate and grand scale, in a way no one else could possibly do.