Cult of the Dead Cow: How the Original Hacking Supergroup Might Just Save the World (Paperback) 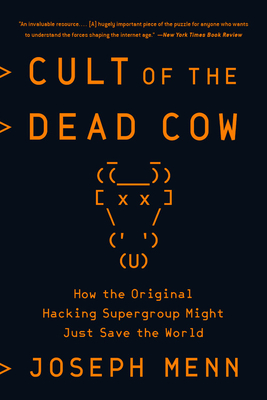 The shocking untold story of the elite secret society of hackers fighting to protect our privacy, our freedom, and even democracy itself.
Cult of the Dead Cow is the tale of the oldest, most respected, and most famous American hacking group of all time. Though until now it has remained mostly anonymous, its members invented the concept of hacktivism, released the top tool for testing password security, and created what was for years the best technique for controlling computers from afar, forcing giant companies to work harder to protect customers. They contributed to the development of Tor, the most important privacy tool on the net, and helped build cyberweapons that advanced US security without injuring anyone.
With its origins in the earliest days of the Internet, the cDc is full of oddball characters -- activists, artists, even future politicians. Many of these hackers have become top executives and advisors walking the corridors of power in Washington and Silicon Valley. The most famous is former Texas Congressman and current presidential candidate Beto O'Rourke, whose time in the cDc set him up to found a tech business, launch an alternative publication in El Paso, and make long-shot bets on unconventional campaigns.
Today, the group and its followers are battling electoral misinformation, making personal data safer, and battling to keep technology a force for good instead of for surveillance and oppression. Cult of the Dead Cow shows how governments, corporations, and criminals came to hold immense power over individuals and how we can fight back against them.

An investigative reporter for Reuters, Joseph Menn is the longest serving and most respected mainstream journalist on cyber security. He has won three Best in Business awards from the Society of American Business Editors & Writers and been a finalist for three Gerald Loeb Awards. His Fatal System Error: The Hunt for the New Crime Lords who are Bringing Down the Internet exposed the Russian government's collaboration with organized criminal hackers and was named one of the 10 best nonfiction books of 2010 by Hudson Booksellers. He also wrote the definitive All the Rave: The Rise and Fall of Shawn Fanning's Napster, an Investigative Reports & Editors Inc. finalist for book of the year. He previously worked for The Financial Times, Los Angeles Times and Bloomberg and has spoken at conferences including Def Con, Black Hat and RSA. He grew up near Boston and lives in San Francisco.

"Long before there was a multi-billion dollar cyber industry, there were some ethical hackers who showed us that the Silicon Valley emperors had no clothes. They looked like misfits, but they showed us how insecure the Internet was and how to make it better. Joe Menn makes this previously untold story entertaining and relevant to today's cyber threats."—Richard A. Clarke, first White House "Cyber Czar"

"Cult of the Dead Cow is an exhilarating and essential look into a part of the hacker underground that has shaped the modern world in profound ways. Readers will be amazed by this crew of eccentric, impassioned geniuses who have so often served as the Internet's conscience while lurking unknown in the shadows. The depth of Joe Menn's reporting is as astonishing as his storytelling - no one could have captured this tale better."—Ashlee Vance, author of Elon Musk: Tesla, SpaceX, and the Quest for a Fantastic Future

"Cult of the Dead Cow reveals a story few know about the origins of white hat hacking and the heroes it celebrates. Despite the title, hacking isn't dead yet!"—Vint Cerf, co-inventor of the Internet

"This dramatic story of how the Internet's first hackers learned to handle their outsized abilities can help us grapple to control the power of today's technology titans."—Bruce Schneier, Harvard fellow and lecturer and author of Click Here to Kill Somebody

"The author narrates a fast-paced story about how a little-known movement that could trace its roots to the psychedelic rock of the 1960s-one visionary was the son of the Jefferson Airplane's drummer, while another was a lyricist for the Grateful Dead-would eventually serve as security advisory for the Pentagon, the cybernetics industry, and geopolitical forces around the globe... A quick tale of black hats and white hats, with a lot of gray area in between."—Kirkus Reviews

"An invaluable resource. The tale of this small but influential group is a hugely important piece of the puzzle for anyone who wants to understand the forces shaping the internet age."—New York Times Book Review

"A beautifully
researched, engrossingly told story about how CDC and its members and offshoot
groups invented much of what has become normal in the modern practice of tech
and security...Menn zeroes in on a perfect spot between the personalities and the
tools, and in so doing, answers some important questions about how we arrived
at the place we're at today, where information security is at the heart of
questions of national security, human rights, free speech, and the survival of
our democracies and our species itself."—Cory Doctorow, author of LittleBrother and Homeland

"A must-read for
anyone who cares about how we broke the internet...and how we just might save
it."—Dustin Volz, Wall StreetJournal security reporter