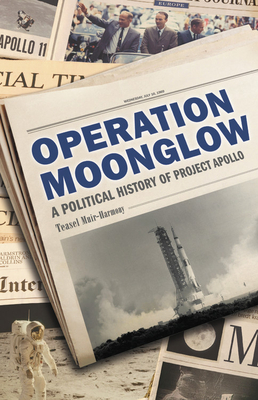 The moon landing was an important moment in history, but many forget what was happening behind the scenes -- discover the groundbreaking political history of the Apollo program in this riveting exploration of America's space missions.
Since July 1969, Neil Armstrong's first step on the Moon has represented the pinnacle of American space exploration and a grand scientific achievement. Yet, as Smithsonian curator Teasel Muir-Harmony argues in Operation Moonglow, its primary purpose wasn't advancing science. Rather, it was part of a political strategy to build a global coalition. Starting with President John F. Kennedy's 1961 decision to send astronauts to the Moon to promote American "freedom" over Soviet "tyranny," Project Apollo was central to American foreign relations. From that perspective, the critical event did not just take place on the lunar surface, it took place in homes, public squares, palaces, and schools around the world, as Apollo captured global attention like never before. After the Moon landing, the Apollo astronauts and President Richard Nixon traveled the world to amplify the sense of participation and global unity shared by billions of people who followed the flight.
Drawing on a rich array of untapped archives and firsthand interviews with Apollo astronauts, Operation Moonglow paints a riveting picture of the intersection of spaceflight, geopolitics, propaganda, and diplomacy during the Cold War.

Teasel Muir-Harmony is the curator of the Project Apollo collection at the Smithsonian National Air and Space Museum and teaches at Georgetown University. She is the author of Apollo to the Moon: A History in 50 Objects and a contributor to the television series Apollo's Moon Shot. She lives in Washington, DC.

“A look at recent history shows that human spaceflight casts a long shadow on the world’s stage. In Operation Moonglow, curator of the Apollo collection at the Smithsonian National Air and Space Museum Teasel Muir-Harmony combines interviews with NASA veterans, historical documents, and international press clippings to bring this forgotten story to life.”
—Wired

“[A] fascinating account of the links between spaceflight and diplomacy in the early Space Age.”
—Jeff Foust, The Space Review

“Engaging.... Muir-Harmony, a curator at the Smithsonian, draws on a rich cache of documents from NASA and the United States Information Agency, among other sources, to bring to vivid life the ground-level public relations onslaught surrounding the Apollo project.”
—BookPage

"Anyone interested in the early days of space exploration will be drawn to this fast-paced, accessible book."
—Library Journal

"The epic tale of Apollo has been told with precision and passion by numerous historians of politics and technology, including myself. But only now, fifty years after the first Moon landing, we have at last the big story others ignored: Apollo's global triumph in public relations. Moreover, Muir-Harmony's thorough research, elegant style, and evocative anecdotes decorate every page. Operation Moonglow is a joyful trip down memory lane for aging baby-boomers and a welcome inspiration for younger Americans."—Walter A. McDougall, author of thePulitzer-Prize winning Heavens and the Earth

"The Apollo program is a performance of power in this fascinating history of the way American presidents used the race to the moon to strengthen U.S. diplomacy. Operation Moonglow is a deeply researched and beautifully written fusion of space, politics, and international relations. It will appeal to a broad audience."—Mary L. Dudziak, author of War Time

"Teasel Muir-Harmony brings the early years of the space race vividly back to life in this wonderful book. Operation Moonglow focuses on a little-known part of this story: how NASA astronauts came to play a significant role in U.S. diplomacy, and the impact they had on America's international standing. Muir-Harmony's richly-detailed narrative reminds us how turbulent this era was-with the Cold War at its height, the fall of colonial powers abroad, racial unrest, and assassinations at home-and the many delightful anecdotes she includes humanize the main actors."—KathrynD. Sullivan, former NASA astronaut

"Operation Moonglow: I love the title, because to me, the moon does glow. The book is a thorough examination of the Apollo Program, and provides a fascinating tour of our political evolution from nationalism to global diplomacy. As a work of history, it is first rate. Teasel Muir-Harmony's focus on space diplomacy lends a unique perspective on the space age. Full of fascinating interviews, sprinkled with little-known tidbits, the narrative glows."—Michael Collins, Apollo 11 astronaut