Out There: A Scientific Guide to Alien Life, Antimatter, and Human Space Travel (For the Cosmically Curious) (Hardcover) 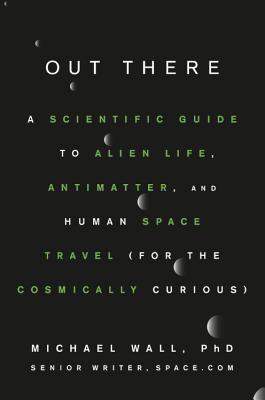 By PhD Wall, Michael, Karl Tate (Illustrator)
Not available to order
Stock uncertain--should fulfill within 10 days or so

In the vein of Randall Munroe's What If? meets Brian Green's Elegant Universe, a senior writer from Space.com leads readers on a wild ride of exploration into the final frontier, investigating what's really "out there."

We've all asked ourselves the question. It's impossible to look up at the stars and NOT think about it: Are we alone in the universe? Books, movies and television shows proliferate that attempt to answer this question and explore it. In Out There Space.com senior writer Dr. Michael Wall treats that question as merely the beginning, touching off a wild ride of exploration into the final frontier. He considers, for instance, the myriad of questions that would arise once we do discover life beyond Earth (an eventuality which, top NASA officials told Wall, is only drawing closer).

Out There is arranged in a simple question-and-answer format. The answers are delivered in Dr. Wall's informal but informative style, which mixes in a healthy dose of humor and pop culture to make big ideas easier to swallow. Dr. Wall covers questions far beyond alien life, venturing into astronomy, physics, and the practical realities of what long-term life might be like for we mere humans in outer space, such as the idea of lunar colonies, and even economic implications. Dr. Wall also shares the insights of some of the leading lights in space exploration today, and shows how the next space age might be brighter than ever.

Dr. Michael Wall is a senior writer at Space.com who has written extensively about the search for alien life. His work also has appeared in Scientific American, NBC News, Fox News, and a number of other outlets. He holds a graduate certificate in science journalism from the University of California, Santa Cruz. Before becoming a writer, Dr. Wall worked as a biologist; he earned a Ph.D. in biology from the University of Sydney in Australia and has 15 peer-reviewed publications. He's based in San Francisco, where he also chronicles the space tech revolution in Silicon Valley.

"This look at some of the key questions of the cosmos and human interactions--it is brain food with flair, and nearly impossible to put down--what a fun ride this book is!"
—Alan Stern, principal investigator of NASA's New Horizons Pluto mission and former head of the space agency's Science Mission Directorate

"Perhaps since the dawn of language, humankind's most profound quest has been to answer the question-'Are we alone?' Mr. Wall's book takes us on an insightful, engaging, and at times humorous journey through the cosmos, and explains why we may now be on the verge of answering that question!"
—Bill Diamond, president and CEO of the SETI Institute.

"With a humorous, accessible tone, Wall, a senior writer for Space.com, answers questions about alien life and space travel...this should appeal to anyone who has ever looked up into the sky and wondered what is out there."
—Publishers Weekly

"Wall's witty and readable style is never preachy, and he readily acknowledges that new discoveries continue to turn long-held assumptions upside down (although it's probably safe to rule out moon-dwelling lunarians). This approach is effective in conveying lots of technical information within a context of manageable scenarios, bolstered by multiple pop-culture references."
—Booklist

"This book provides a simple introduction to possibilities of other intelligent species in a conversational approach that should appeal to a wide range of readers."
—Library Journal

"Out There is a refreshingly playful romp through the most exciting aspects of space exploration."—Scientific American

"[A] succinct and accessible summary of the search for extraterrestrial life in the 21st Century...Out There goes a long way toward fostering a basic, scientific literacy on its topic. For anyone interested in research-based information about the search for ET, Wall proves the perfect guide and a sure hand. As an introduction for lay-readers, it's the perfect primer."—-Scientific Inquirer