Failure to Adjust: How Americans Got Left Behind in the Global Economy (Council on Foreign Relations Book) (Paperback) 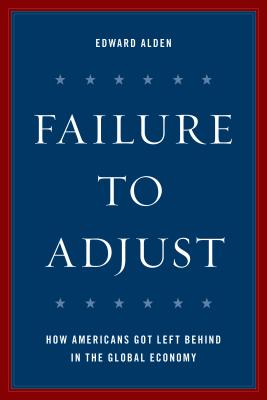 By Edward Alden
$19.95
NOT on our shelves now. Usually ships from warehouse in several days.

The vast benefits promised by the supporters of globalization, and by their own government, have never materialized for many Americans. In Failure to Adjust Edward Alden provides a compelling history of the last four decades of US economic and trade policies that have left too many Americans unable to adapt to or compete in the current global marketplace. He tells the story of what went wrong and how to correct the course. Originally published on the eve of the 2016 presidential election, Alden's book captured the zeitgeist that would propel Donald J. Trump to the presidency. In a new introduction to the paperback edition, Alden addresses the economic challenges now facing the Trump administration, and warns that economic disruption will continue to be among the most pressing issues facing the United States. If the failure to adjust continues, Alden predicts, the political disruptions of the future will be larger still.

Edward Alden is the Bernard L. Schwartz senior fellow at the Council on Foreign Relations, and the author of The Closing of the American Border: Terrorism, Immigration and Security Since 9/11 (Harper, 2008), which was a finalist for the J. Anthony Lukas Book Prize.