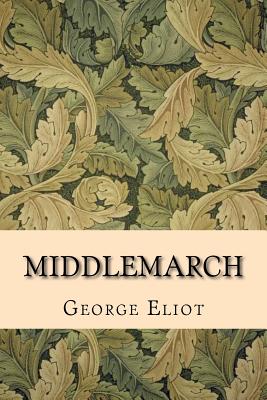 By George Eliot
$21.84
NOT on our shelves now. Usually ships from warehouse in several days.

Middlemarch, A Study of Provincial Life is a novel by English author George Eliot, first published in eight volumes during 1871-2. The novel is set in the fictitious Midlands town of Middlemarch during 1829-32, and it comprises several distinct (though intersecting) stories and a large cast of elaborately depicted characters. Significant themes include the status of women, the nature of marriage, idealism, self-interest, religion, hypocrisy, political reform, and education. Although containing comical elements, Middlemarch is a work of realism that refers to many historical events: the 1832 Reform Act, the beginnings of the railways, the death of King George III, and the succession of his brother, the Duke of Clarence (the future King William IV). In addition, the work incorporates contemporary medical science and examines the deeply reactionary mind-set found within a settled community facing the prospect of unwelcome change. Middlemarch it is now widely regarded as her best work and one of the greatest novels ever written in English.

George Eliot is the penname of Mary Ann Evans (1819-1880, an English novelist, journalist, translator and one of the leading writers of the Victorian era. She is the author of seven novels, including Adam Bede (1859), The Mill on the Floss (1860), Silas Marner (1861), Middlemarch (1871-72), and Daniel Deronda (1876), most of them set in provincial England and known for their realism and psychological insight. She used a male pen name, she said, to ensure her works would be taken seriously. Her 1872 work Middlemarch has been described by Martin Amis and Julian Barnes as the greatest novel in the English language.