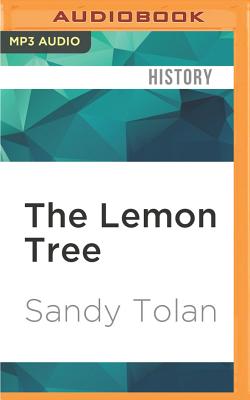 By Sandy Tolan, Sandy Tolan (Read by)
Not available to order
Stock uncertain--should fulfill within 10 days or so

The tale of a simple act of faith between two young people--one Israeli, one Palestinian--that symbolizes the hope for peace in the Middle East. In 1967, not long after the Six-Day War, three young Arab men ventured into the town of Ramle, in what is now Jewish Israel. They were cousins, on a pilgrimage to see their childhood homes; their families had been driven out of Palestine nearly 20 years earlier. One cousin had a door slammed in his face, and another found his old house had been converted into a school. But the third, Bashir Al-Khairi, was met at the door by a young woman called Dalia, who invited them in. This act of faith in the face of many years of animosity is the starting point for a true story of a remarkable relationship between two families, one Arab, one Jewish, amid the fraught modern history of the region. In his childhood home, in the lemon tree his father planted in the backyard, Bashir sees dispossession and occupation; Dalia, who arrived as an infant in 1948 with her family from Bulgaria, sees hope for a people devastated by the Holocaust. As both are swept up in the fates of their people, and Bashir is jailed for his alleged part in a supermarket bombing, the friends do not speak for years. They finally reconcile and convert the house in Ramle into a day-care centre for Arab children of Israel, and a center for dialogue between Arabs and Jews. Now the dialogue they started seems more threatened than ever; the lemon tree died in 1998, and Bashir was jailed again, without charge. The Lemon Tree grew out of a 43-minute radio documentary that Sandy Tolan produced for Fresh Air. With this audiobook, he pursues the story into the homes and histories of the two families at its center, and up to the present day. Their stories form a personal microcosm of the last 70 years of Israeli-Palestinian history. In a region that seems ever more divided, The Lemon Tree is a reminder of all that is at stake, and of all that is still possible.