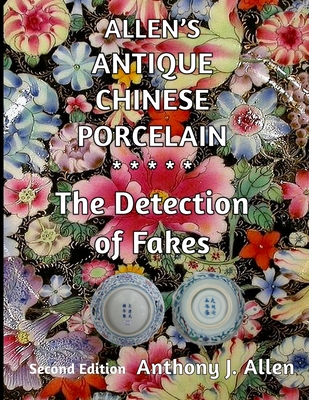 By Anthony J. Allen
$132.25
NOT on our shelves now. Usually ships from warehouse in several days.

From Anthony J. Allen, the author of four best-selling books on ancient Chinese bronzes, ancient Chinese ceramics, and two others on later Chinese porcelain, this SECOND EDITION of "Allen's Antique Chinese Porcelain *** The Detection of Fakes" is his most ambitious project yet. In plain language, he describes tricks of the trade learned over his long experience authenticating genuine antiques and detecting fakes. The minefield that antique Chinese porcelain can become for the uninitiated is described and illustrated in full colour detail with examples dating from the Ming dynasty circa 1500 AD to 2000 AD. There is also brief mention of some of the pottery and stoneware ceramics in this period.This book is aimed at the novice collector, dealer, or museum curator, who largely because of rapidly escalating prices and presence of fakes, is often too frightened to enter the fascinating field of antique Chinese porcelain. Both novice and experienced readers will learn from his authentication techniques, as he describes never before published features to look for, firstly to authenticate genuine antique porcelain, but also to rule out the bane of every collector; the fake made intentionally to deceive. Non-Chinese speaking readers are taught to read reign marks and to distinguish genuine marks from those apocryphal marks which have been added to a later piece. There is even a formula for converting Islamic dates to the Gregorian calendar.Allen's forthright style of writing may upset some of his peers, sections of academia, and the sellers of fakes, for which he has zero tolerance, as he leads readers through Imperial, domestic and export porcelain, then into the sub-branches including shipwrecks and shards recovered from the old kiln sites in Jingdezhen, the porcelain capital of China. Underglaze blue, famille rose and verte, monochromes, and pieces of various age, shape and decoration are illustrated, not just with a frontal view, but also of the undersides. Export wares, now the most common type of antique Chinese porcelain still available in the West, get special attention as he focuses on late Ming dynasty wares, underglaze blue, 18th century Chinese Imari, Batavian wares, armorial porcelain and famille rose of the 18th and 19th centuries.Faults, flaws, imperfections, foot rims, glazes, bubbles, are illustrated at length, including those features one expects to find, but also those that should not be present, notably on fakes.