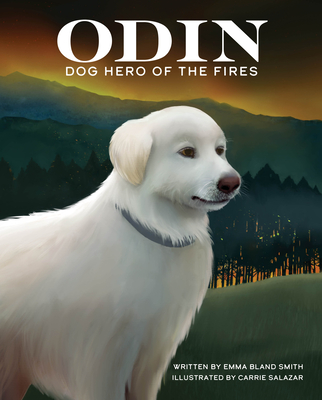 The incredible true story of one dog's heroic feats during the 2017 Tubbs Fire, one of the most destructive wildfires in California history.

One October night in 2017, when wildfire raged in Sonoma and Napa counties, the Hendel family was suddenly evacuated from their homes and farms to escape to safety and forced to leave behind their Pyrenees dog, Odin. Odin refused to leave his nightly post of guarding the family's eight young goats, despite the family's desperate attempts to lead him away. Brokenhearted, the Hendels were sure they would never see their dog again.

But when the fire calmed and the family returned home, to their shock they found Odin singed yet safe, along with all the goats and several orphaned deer the dog had protected as well. Odin, Dog Hero of the Fires is a touching and inspirational true tale that honors the bravery and strength of Odin as well as commemorates the stories of those affected by the Tubbs Fire.