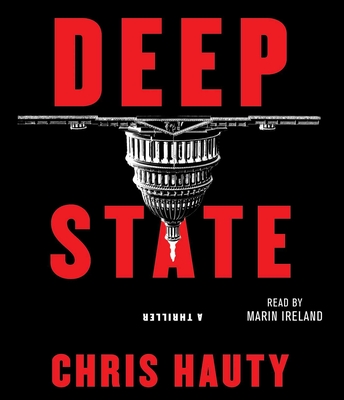 “Deep State is a compelling page-turner with an unpredictable last-minute twist that will knock you off your feet. Hayley Chill is an Army infantry soldier with an eye on doing more to serve her country. In true snatched-from-the-headlines fashion, Hayley accepts a White House internship in the administration of a highly controversial and divisive president with apparent strong Russian leanings, which puts him in the crosshairs of operatives intent on taking him and his administration down. Hayley finds herself caught up in the intricate plot and may be the only one who can stop it. Perhaps ironically, I really think this book would appeal equally to suspense-loving readers on either side of the political spectrum!”
— Brent Bunnell, Fiction Addiction, Greenville, SC

“No shrinking violet, Hayley Chill is ex-Army and an ex-boxer who takes a job as a White House intern and subsequently has several life-changing interactions with the president. Deep State is a fast-paced thriller with unexpected twists and turns and an ending that will take you totally by surprise.”
— Scott Simons, The Dog Eared Book, Palmyra, NY

“One of the more surprising double-reverse plot twists...in some time.” —The New York Times

In this “propulsive, page-turning, compelling, fragmentation grenade of a debut thriller” (C.J. Box, #1 New York Times bestselling author), a deadly plot against the president’s life emerges from the shadows of the Deep State.

Recently elected President Richard Monroe—populist, controversial, and divisive—is at the center of an increasingly polarized Washington, DC. Never has the partisan drama been so tense or the paranoia so rampant. In the midst of contentious political turf wars, the White House chief of staff is found dead in his house and West Wing intern and ex-Army grunt Hayley Chill is positive that it’s not from natural causes.

Determined to find the truth, Hayley uncovers shocking evidence that a wide-ranging conspiracy is running beneath the surface of DC in an effort to undermine the rule of law—and democracy itself. Soon, Hayley is in a race against time to reveal the truth and save the life of the next victim: the president.

“Deep State rings eerily true [and] will keep you turning pages well into the night” (Jack Carr, former Navy SEAL and author of The Terminal List).

"Narrator Marin Ireland inhabits Haley Chill as the tenacious former military boxer takes on the role of a White House intern who must deal with the attempted coup of a recently elected president. Dark forces threaten the pillars of democracy and the rule of law when Haley finds her boss, the chief of staff, murdered. Ireland's delivery matches the quickening pace and ramped-up tension as the conspiracy unfolds. Hauty uses his screenwriting skills to deliver technicolor scenes of the conspirators and the unlikely heroine. This deep state is real, and people are dying to keep it from being revealed. Moreover, there's a twist that elevates this thriller, so don't be surprised if you find your jaw on the floor as the last few minutes unspool."
— AudioFile Magazine