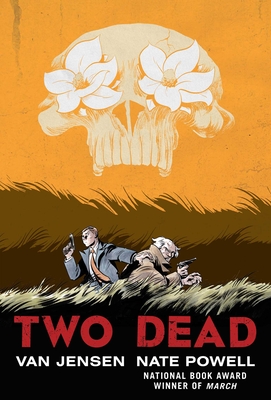 After World War II, tensions rise in a Southern city ruled by organized crime, touching countless residents as they struggle to make sense of the new world. A sudden act of violence sets off a series of bloody events between the police and mafia as they lash out against one another. As the violence worsens, desperation grows to stop it, by any means necessary.

Told in multiple perspectives—from a seemingly untouchable mafia don, to a gun-happy seasoned detective succumbing to the depths of his schizophrenia, to a newly minted police lieutenant haunted by his recent service in the war, and two African-American brothers, one mired in corruption and the other leading a local militia in an effort to see that justice is served—Two Dead is at once a white-knuckled and unputdownable thriller, a roman à clef inspired by true events, and a book about post-traumatic stress disorder and the underlying social traumas of how war and segregation affect their survivors on all fronts.

Van Jensen is a former crime reporter at the Arkansas Democrat-Gazette newspaper in Little Rock, Arkansas. He has gone on to write for and edit magazines. Breaking into comic books in 2009 with the acclaimed Pinocchio, Vampire Slayer graphic novel series, Jensen has gone on to write some of the biggest characters in comics, including The Flash, Superman, Wonder Woman, and James Bond. Other series he has created include Cryptocracy (Dark Horse) and Valkyrie Beer Delivery (Stela). Jensen also writes and directs for film and TV. A native of Western Nebraska, he lives in Atlanta.

Nate Powell is the first cartoonist ever to win the National Book Award. His Eisner Award–winning work includes civil rights icon John Lewis’s historic March trilogy, Come Again, and viral comics essay About Face, as well as Any Empire, Swallow Me Whole, and The Silence of Our Friends. Powell’s work has also received the Robert F. Kennedy Book Award, the Michael L. Printz Award, two Ignatz Awards, four YALSA Great Graphic Novels For Teens selections, the Walter Dean Myers Award, and is a two-time Los Angeles Times Book Prize finalist. He has discussed his work at the United Nations, as well as on MSNBC’s The Rachel Maddow Show, PBS, CNN, and Free Speech TV. He lives in Bloomington, Indiana. Visit him at SeeMyBrotherDance.org.

“Betrayal and violence sizzle and broil in this graphic novel, right down to its extraordinary lettering, its size fluctuating, its style shifting, and the words sitting rough and uneasy in their confining balloons. Award-winning cartoonist Powell imbues his characters with distinctive visual personalities and humanizes them with a subtle softening and rounding of lines even as he evokes the moral dread with shadows that push into figures and landscapes and bleed blackly across the page. An intense, gritty, thrilling crime story and a painful rumination on race, rage, and inescapable ghosts, this could be an early contender for the next awards season.”
—Booklist (starred review)

“The plot rocketing this dramatic, socially conscious crime story is fictional, but its fuel is the true tales that Jensen dug up as a crime reporter….vividly depicted historical detailing….The noirish, harshly shadowed art from Powell recalls his work on March, with a brutal dusting of Frank Miller. The Southern gothic atmosphere and sedimentary layers of guilty consciences read like one of the (better) seasons of True Detective. This lurid, violence-spattered crime graphic novel might be made up, but the questions it raises are a real gut punch.”
—Publishers Weekly

“A kinetic noir graphic novel about the cost of war and guilt....The knotty story shows the traumas of the past shaping the present, some panels literally haunted by specters. Fresh from his work on John Lewis' acclaimed March trilogy, Powell applies a pleasingly realistic look while cartoonish flourishes electrify the page. Jensen weaves a propulsive narrative of intersecting stories and festering wounds that....is highly engaging.”
—Kirkus Reviews