Feast of Sorrow: A Novel of Ancient Rome (Hardcover) 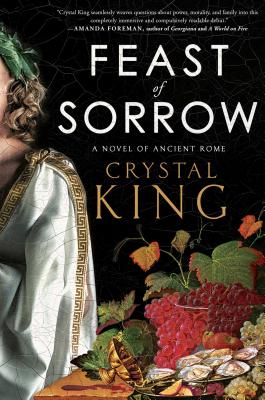 Set amongst the scandal, wealth, and upstairs-downstairs politics of a Roman family, Crystal King’s seminal debut features the man who inspired the world’s oldest cookbook and the ambition that led to his destruction.

On a blistering day in the twenty-sixth year of Augustus Caesar’s reign, a young chef, Thrasius, is acquired for the exorbitant price of twenty thousand denarii. His purchaser is the infamous gourmet Marcus Gavius Apicius, wealthy beyond measure, obsessed with a taste for fine meals from exotic places, and a singular ambition: to serve as culinary advisor to Caesar, an honor that will cement his legacy as Rome's leading epicure.

Apicius rightfully believes that Thrasius is the key to his culinary success, and with Thrasius’s help he soon becomes known for his lavish parties and fantastic meals. Thrasius finds a family in Apicius’s household, his daughter Apicata, his wife Aelia, and her handmaiden, Passia, with whom Thrasius quickly falls in love. But as Apicius draws closer to his ultimate goal, his reckless disregard for any who might get in his way takes a dangerous turn that threatens his young family and places his entire household at the mercy of the most powerful forces in Rome.

Crystal King is an author, culinary enthusiast, and marketing expert. Her writing is fueled by a love of history and a passion for the food, language, and culture of Italy. She has taught classes in writing, creativity, and social media at several universities including Harvard Extension School and Boston University, as well as at GrubStreet, one of the leading creative writing centers in the US. A Pushcart Prize–nominated poet and former co-editor of the online literary arts journal Plum Ruby Review, Crystal received her MA in critical and creative thinking from UMass Boston, where she developed a series of exercises and writing prompts to help fiction writers in medias res. She resides in Boston but considers Italy her next great love after her husband, Joe, and their two cats, Nero and Merlin. She is the author of Feast of Sorrow.

"If true gastronomy resides at the intersection of food, art and culture, then Crystal King's debut novel can only be described as a gastronomical delight . . . .Every page oozes with remarkable insights . . . satisfying, but readers are left hungry for more."
— Associated Press

“In her addictively readable first novel . . . the food lore is fascinating and the time period is inherently dramatic . . . .[A]ficionados of all things SPQR will eat this up.”
— Kirkus Reviews

"Finely paced. . . . the novel combines exotic menus with the melodrama of a Greek tragedy. King’s debut is a compelling historical drama with an appetizing center."
— Booklist

"King’s descriptions of the food and entertainment are exquisite, her characters are beautifully drawn, and events and people of the times are deftly woven throughout . . . A delight to the senses, King’s debut novel is to be savored and devoured."
— Library Journal, starred review

“Crystal King's debut is a feast for the senses, bringing ancient Rome to dark, vibrant life. Politics, intrigue, danger, and passion mix deliciously in this tale of a young slave vaulted into the corridors of power as personal chef to the ancient world's greatest gourmet. Not to be missed!”
— Kate Quinn, author of Mistress of Rome

“Through the lens of a slave in ancient Rome, Crystal King illuminates a realm of seemingly impossible gluttony and excess, along with every other deadly sin. In the household of outrageous gourmand Apicius, he of extraordinarily decadent mores, one man, a slave, Thrasius, provides the sole ethical center. Feast of Sorrow is impossible to put down.”

"Crystal King’s debut novel, Feast of Sorrow, tells the story of Apicius, the notorious gourmand of ancient Rome, from the viewpoint of his slave and cook Thrasius. It’s a dark and engrossing read, and provides an evocative new perspective on the rule of Tiberius."
— Emily Hauser, author of For the Most Beautiful

"Crystal King has written a delicious feast of a book, one that allows us to not only see, but also taste ancient Rome in all its dark and varied appetites."
— Yael Goldstein Love, author of Overture

"The historical world of Feast of Sorrow lives and breathes, and it is a delight to follow its characters’ struggle for happiness and survival amidst the simmering peril of Rome’s great houses. Even if you’re not a foodie drawn to novels of ancient Rome, this immersive, sensorily rich page-turner will take you for a delicious and unforgettable ride."
— Tim Weed, author of Will Poole’s Island

‘An engaging foray into the treacherous world of Claudio-Julian Rome from a fresh perspective. Who knew that the gourmand Apicius was larger than life? King deftly serves up intrigue, scandal and heartbreak with lashings of exotic sauces, mouth-watering recipes and the occasional drop of poison. Highly recommended.”
— Elisabeth Storrs, author of the series Tales of Ancient Rome

"The ancient Rome of Crystal King’s Feast of Sorrow is filled with delectable dishes and astonishing injustice, deep loyalties and stunning loss. By the time you’re done, you’ll want a sip of honeyed water alongside some fried hyacinth bulbs. An engrossing read."
— Marjan Kamali, author of Together Tea

“Ancient Rome comes alive with a remarkable degree of immediacy and authenticity. I savored every page of this compulsively readable novel.”
— Lisa Borders, author of The Fifty First State

"King excels at researching a historical period, and her knowledge of the culinary life of early imperial Rome is second to none. When Thrasius cooks up a particular recipe for one of Apicius’ extravagant dinners, the reader’s mouth waters, even when the ingredients are unfamiliar. By recreating Apicius’ famous recipes, the world of ancient Rome comes to vivid, sparkling life."
— BookReporter

“Crystal King seamlessly weaves questions about power, morality, and family into this completely immersive and compulsively readable debut.”
— Amanda Foreman, author of Georgiana and A World on Fire

“A plunge into the ancient Roman world in all its senses—especially taste.  But the character studies of the people are even tastier than the recipes!  A Roman feast on many levels, all delicious.”
— Margaret George