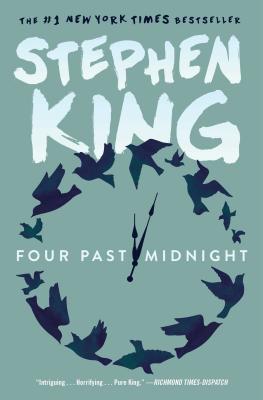 Includes the story “The Sun Dog”—set in the fictional town of Castle Rock, Maine

The Bram Stoker Prize-winner for Best Fiction Collection—four chilling novellas from Stephen King that will “grab you and not let go” (The Washington Post).

With the success of the Hulu series 11/22/63 starring James Franco and the highly anticipated The Dark Tower movie release, Stephen King's brand is stronger than ever. This collection, nominated for a Locus Award, is guaranteed to keep readers awake long after bedtime, and features an introduction and prefatory notes to each novella by the author. “Stephen King is a master storyteller, and you will never forget these stories,” raves the Seattle Times about Four Past Midnight.

One Past Midnight: “The Langoliers” takes a red-eye flight from LA to Boston into a most unfriendly sky. Only eleven passengers survive, but landing in an eerily empty world makes them wish they hadn’t. Something’s waiting for them, you see.

Three Past Midnight: “The Library Policeman” is set in Junction City, Iowa, an unlikely place for evil to be hiding. But for small businessman Sam Peebles, who thinks he may be losing his mind, another enemy is hiding there as well—the truth. If he can find it in time, he might stand a chance.

Four Past Midnight: “The Sun Dog,” a menacing black dog, appears in every Polaroid picture that fifteen-year-old Kevin Delevan takes with his new camera, beckoning him to the supernatural. Old Pop Merrill, Castle Rock’s sharpest trader, aims to exploit The Sun Dog for profit, but this creature that shouldn’t exist at all, is a very dangerous investment.

Stephen King is the author of more than sixty books, all of them worldwide bestsellers. His recent work includes Fairy Tale, Billy Summers, If It Bleeds, The Institute, Elevation, The Outsider, Sleeping Beauties (cowritten with his son Owen King), and the Bill Hodges trilogy: End of Watch, Finders Keepers, and Mr. Mercedes (an Edgar Award winner for Best Novel and a television series streaming on Peacock). His novel 11/22/63 was named a top ten book of 2011 by The New York Times Book Review and won the Los Angeles Times Book Prize for Mystery/Thriller. His epic works The Dark Tower, It, Pet Sematary, Doctor Sleep, and Firestarter are the basis for major motion pictures, with It now the highest-grossing horror film of all time. He is the recipient of the 2020 Audio Publishers Association Lifetime Achievement Award, the 2018 PEN America Literary Service Award, the 2014 National Medal of Arts, and the 2003 National Book Foundation Medal for Distinguished Contribution to American Letters. He lives in Bangor, Maine, with his wife, novelist Tabitha King.