The Speed Game: My Fast Times in Basketball (Hardcover) 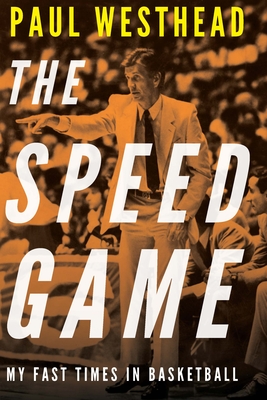 By Paul Westhead
$29.95
ON HAND in at least ONE of our stores. Click through or call for up-to-the-minute availability.

Paul Westhead was teaching high school in his native Philadelphia when he was named La Salle University's men's basketball coach in 1970. By 1980 he was a Los Angeles Lakers assistant, soon to be hired as head coach, winning an NBA title with Hall of Fame center Kareem Abdul-Jabbar and rookie guard Magic Johnson. After compiling a 112-50 record, he was fired in November 1981. After a short stay as coach of the Chicago Bulls, Westhead reemerged in the mideighties as a coach at Loyola Marymount in California, where he designed his highly unusual signature run-and-gun offense that came to be known as "The system." The Speed Game offers a vibrant account of how Westhead helped develop a style of basketball that not only won at the highest levels but went on to influence basketball as it's played today. Known for implementing an up-tempo, quick-possession, high-octane offense, Westhead is the only coach to have won championships in both the NBA and WNBA. But his long career can be defined by one simple question he's heard from journalists, fellow coaches, his wife, and, well, himself: Why? Why did he insist on playing such a controversial style of basketball that could vary from brilliant to busted? Westhead speaks candidly here about the feathers he ruffled and about his own shortcomings as he takes readers from Philadelphia's West Catholic High, where he couldn't make varsity, to the birth of the Showtime Lakers and to the powerhouse he built nearly ten years later at Loyola, where his team set records likely never to be approached. Westhead says he always found himself telling prospective bosses, "My speed game is gonna knock your socks off " So will his story and what it could do to bring back a popular style of play.

Paul Westhead has been a basketball coach and offensive innovator with forty-plus years of experience at all levels. He taught English and coached basketball at Cheltenham High School and was an assistant basketball coach at his alma mater, St. Joseph's University, before coaching at La Salle University. Westhead guided the Los Angeles Lakers to an NBA championship in 1980 and brought his high-scoring offense to the Chicago Bulls, Denver Nuggets, Golden State Warriors, Orlando Magic, and Seattle Supersonics/Oklahoma City Thunder. He took his fast-break style to the college game at Loyola Marymount and also to the WNBA, where his Phoenix Mercury team won the championship in 2007.