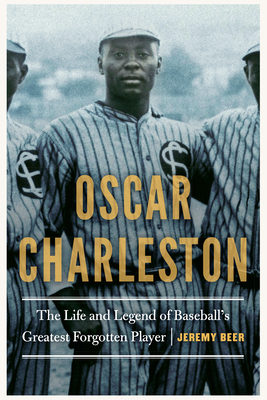 By Jeremy Beer
$29.95
ON HAND in at least ONE of our stores. Click through or call for up-to-the-minute availability.

Buck O’Neil once described him as “Ty Cobb, Babe Ruth, and Tris Speaker rolled into one.” Among experts he is regarded as the best player in Negro Leagues history. During his prime he became a legend in Cuba and one of Black America’s most popular figures. Yet even among serious sports fans, Oscar Charleston is virtually unknown today.

In a long career spanning from 1915 to 1954, Charleston played against, managed, befriended, and occasionally fought men such as Lou Gehrig, Jimmie Foxx, Lefty Grove, Satchel Paige, Josh Gibson, Jesse Owens, Roy Campanella, and Branch Rickey. He displayed tremendous power, speed, and defensive instincts along with a fierce intelligence and commitment to his craft. Charleston’s competitive fire sometimes brought him trouble, but more often it led to victories, championships, and profound respect.

While Charleston never played in the Major Leagues, he was a trailblazer who became the first Black man to work as a scout for a Major League team when Branch Rickey hired him to evaluate players for the Dodgers in the 1940s. From the mid‑1920s on, he was a player‑manager for several clubs. In 1932 he joined the Pittsburgh Crawfords and would manage the club many consider the finest Negro League team of all time, featuring five future Hall of Famers, including himself, Cool Papa Bell, Josh Gibson, Judy Johnson, and Satchel Paige.

Charleston’s combined record as a player, manager, and scout makes him the most accomplished figure in Black baseball history. His mastery of the quintessentially American sport under the conditions of segregation revealed what was possible for Black achievement, bringing hope to millions. Oscar Charleston introduces readers to one of America’s greatest and most fascinating athletes.

Jeremy Beer is a founding partner at American Philanthropic in Phoenix. He is the author of The Philanthropic Revolution: An Alternative History of American Charity and his writing on sports, society, and culture has appeared in the Washington Post, National Review, First Things, and the Baseball Research Journal, among many other venues.

"In this thorough account, Beer has created a definitive work on Charleston's life and accomplishments. The result is a fascinating story and an important piece of sports history."—Gus Palas, Library Journal, starred review
— Gus Palas

“Beer’s evenhanded narrative makes a convincing case for Charleston as the greatest baseball player who never played in the majors. This is a solid hit for baseball historians and fans alike.”—Publishers Weekly
— Publishers Weekly

“[Jeremy Beer] has managed to construct a portrait of Charleston that clearly establishes him as a great baseball figure and a pioneer whose career paved the way for many who followed him. . . . An invaluable contribution to baseball history.”—Wes Lukowsky, Booklist

"Oscar Charleston fills a void in baseball history, providing context and nuance to a great player who was enigmatic in life—and in death."—Bob D'Angelo, Sports Bookie blog
— Bob D'Angelo

"Interwoven with modern statistics calculated from the available box scores and other sources of information, one cannot help to wonder how Charleston would have fared in the major leagues had he been allowed to play. . . . Beer paints a picture of a man who should be considered one of the greatest players ever to pick up a bat and glove. Readers who want to get an informed introduction to Oscar Charleston should pick up this book."—Lance Smith, Guy Who Reviews Sports Books
— Lance Smith

"I miss nothing like I miss baseball, and author Jeremy Beer has delivered a treasure to fill the hours between vintage games on the MLB Network."—Frank Murtaugh, Memphis Flyer
— Frank Murtaugh

"One of Beer’s most extraordinary accomplishments is giving a chronological narrative through the labyrinthine career of Charleston, from military ball in the Philippines, through a score of Negro League teams, winter ball dates in Palm Beach and in Cuba, and various barnstorming ventures, and then on into the managerial ranks and the grooming of younger stars—including Satchel Paige and Josh Gibson—up through to his final gig, managing an Indianapolis Clowns team that had just lost their young shortstop, Henry Aaron, to the big leagues. Beer manages to keep the narrative cogent, with Charleston’s achievements, captured through newspaper accounts and eyewitnesses, stirring the imagination at every turn."—Michael Stevens, Front Porch Republic
— Michael Stevens

“There is a special place in heaven—or in Cooperstown, which is much the same thing—for the University of Nebraska Press, which continues to enrich our understanding of baseball history. It continues this noble work with Jeremy Beer’s biography of Oscar Charleston. It does justice to the player whom Bill James rates as the greatest of all Negro Leagues players—and the fourth-greatest player of all time, behind only Babe Ruth, Honus Wagner, and Willie Mays.”—George F. Will, columnist and author of Men at Work: The Craft of Baseball

“Weaving a story that is as entertaining as it is edifying, Jeremy Beer does the culture a great service by delivering a biography of the forgotten superstar Oscar Charleston—a man who lived on his own terms and played baseball like few others.”—Charles Leerhsen, author of Ty Cobb: A Terrible Beauty

“What if Oscar Charleston had still been in his prime when it came time for the color barrier to be broken in Major League Baseball? On sheer talent, he would have been an obvious choice to carry out the role subsequently championed by Jackie Robinson. In this crisp chronicle of Charleston’s life, Jeremy Beer revitalizes the legend of an indomitably competitive man who deserves to be rated among baseball’s true immortals.”—Branch Rickey III, president of the Pacific Coast League

“Forgotten by many, remembered mostly as a foul-tempered brawler by others, Oscar Charleston was in fact perhaps the greatest Negro League baseball player of all time: a commanding force at the plate, at first base, in the outfield, on the base paths and as a pioneering scout and manager. In this thoroughly researched and vividly written biography, Jeremy Beer finally does justice to Oscar Charleston the man and to his place in the history of America’s pastime.”—Mark Whitaker, author of Smoketown: The Untold Story of the Other Great Black Renaissance

“If you believe what many veterans of the Negro Leagues said—that Oscar Charleston was the greatest all-time all-around player—then you will find Jeremy Beer’s biography to be the unapologetic gospel truth. Beer’s examination of the grand Oscar’s youthful days, his military career, his adult life, and his baseball legacy is the fruit of serious grassroots research. He proves that Charleston was the most divine legend there ever was!”—Larry Lester, chairman of the SABR Negro Leagues Committee and author of Baseball’s First Colored World Series

“Denied his due in life, the greatest Negro Leaguer of all time—indeed, one of the greatest ballplayers ever, black or white—was overdue this spotlight. Good on Jeremy Beer for a book baseball buffs will love, about a man most of us weren’t lucky enough to see: Oscar Charleston.”—Gregg Doyel, sports columnist for the Indianapolis Star