Striking Distance: Bruce Lee and the Dawn of Martial Arts in America (Paperback) 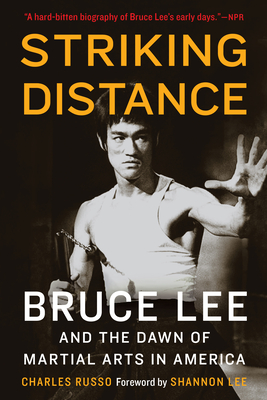 By Charles Russo
$19.95
ON HAND in at least ONE of our stores. Click through or call for up-to-the-minute availability.

In the spring of 1959, eighteen-year-old Bruce Lee returned to San Francisco, the city of his birth. Although the martial arts were widely unknown in America, Bruce encountered a robust fight culture in the Bay Area, populated with talented and trailblazing practitioners such as Lau Bun, Chinatown’s aging kung fu patriarch; Wally Jay, the innovative Hawaiian jujitsu master; and James Lee, the Oakland street fighter. Regarded by some as a brash loudmouth and by others as a dynamic visionary, Bruce spent his first few years back in America advocating for a modern approach to the martial arts, and showing little regard for the damaged egos left in his wake.
The year of 1964 would be an eventful one for Bruce, in which he would broadcast his dissenting worldview before the first great international martial arts gathering, and then defend it by facing down Wong Jack Man—Chinatown’s young kung fu ace—in a legendary behind-closed-doors showdown. These events were a catalyst to the dawn of martial arts in America and a prelude to an icon.
Based on over one hundred original interviews, Striking Distance chronicles Bruce Lee’s formative days amid the heated martial arts proving ground that thrived on San Francisco Bay in the early 1960s.

Charles Russo is an award-winning journalist who lives in San Francisco. Shannon Lee is the daughter of Bruce Lee and CEO of Bruce Lee Enterprises.

"As someone who has been a Bruce Lee fan since I was a teenager, I remember the time when Bruce Lee's life was all myth and mystery. Thank you to journalist Charles Russo who has a written a fun-to-read Bruce Lee book for grownups. It both solidifies Bruce Lee's place in martial arts, pop culture, and history while at the same time demonstrating that there was a good reason Bruce was a walking legend in his brief time on this planet. Bravo!"—W. Kamau Bell, comic and host of CNN’s United Shades of America
— W. Kamau Bell

"Striking Distance: Bruce Lee and the Dawn of Martial Arts in America is one of those rare martial arts volumes that is likely to be widely read by individuals practicing a variety of styles."—Ben Judkins, Kung Fu Tea
— Ben Judkins

“Striking Distance is one of the few well-written, well-researched books about Bruce out there. Charles and his book were extremely helpful in my research and I relied upon his work a great deal in covering the Bay Area period of Lee’s life. Every Bruce Lee fan should buy his book.”—Matthew Polly, author of Bruce Lee: A Life

“Striking Distance places the living, breathing man back into history, outside of the myth, and tells the real story from the street level up of Lee’s contribution to the global rise of gung fu. Charles Russo writes with all the fire, wisdom, and heart that Bruce Lee deserves. A poignant and powerful achievement, and a must-read for anyone interested in Bruce and the martial arts.”—Jeff Chang, author of Can’t Stop Won’t Stop: A History of the Hip-Hop Generation

"Charles Russo's Striking Distance is a concise, eminently readable biography of the fighting legend in the formative period of his life."—James Sullivan, Datebook
— James Sullivan

"For anyone interested in learning more about the origins of martial arts in this country, Striking Distance is a tremendous read."—Brian Burmeister, ARETE
— Brian Burmeister

"Russo's work is a useful addition to both the biographies of Bruce Lee, and the history of martial arts in general, and is quite an entertaining read as well."—Delano Lopez, Origins
— Delano Lopez