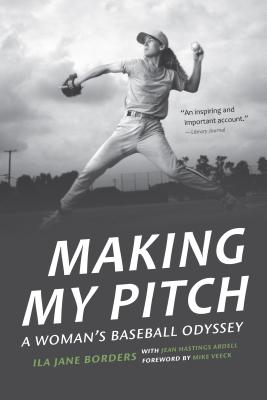 By Ila Jane Borders, Jean Hastings Ardell, Mike Veeck (Foreword by)
$19.95
ON HAND in at least ONE of our stores. Click through or call for up-to-the-minute availability.

Making My Pitch tells the story of Ila Jane Borders, who despite formidable obstacles became a Little League prodigy, MVP of her otherwise all-male middle school and high school teams, the first woman awarded a college baseball scholarship, and the first to pitch and win a complete men’s collegiate game. After Mike Veeck signed Borders in May 1997 to pitch for his St. Paul Saints of the independent Northern League, she accomplished what no woman had done since the Negro Leagues era: play men’s professional baseball. Borders played four professional seasons and in 1998 became the first woman in the modern era to win a professional ball game.

Borders had to find ways to fit in with her teammates, reassure their wives and girlfriends, work with the media, and fend off groupies. But these weren’t the toughest challenges. She had a troubled family life, a difficult adolescence as she struggled with her sexual orientation, and an emotionally fraught college experience as a closeted gay athlete at a Christian university.
Making My Pitch shows what it’s like to be the only woman on the team bus, in the clubhouse, and on the field. Raw, open, and funny at times, her story encompasses the loneliness of a groundbreaking pioneer who experienced grave personal loss. Borders ultimately relates how she achieved self-acceptance and created a life as a firefighter and paramedic and as a coach and goodwill ambassador for the game of baseball.

Ila Jane Borders is the first woman to win a men’s professional baseball game. She has been honored twice at the National Baseball Hall of Fame and was inducted in 2003 into the Baseball Reliquary’s Shrine of the Eternals. Jean Hastings Ardell is the author of Breaking into Baseball: Women and the National Pastime. Mike Veeck is a baseball executive and part owner of five teams, including the St. Paul Saints and the Charleston RiverDogs.

"An inspiring and important account, told with grace and self-awareness that will appeal to baseball and sports fans along with readers interested in LGBTQ memoirs."—Janet Davis, Library Journal
— Janet Davis

“At last! The moving story of Ila Borders, as told to the gifted author and researcher Jean Ardell, will make readers wonder how much longer the baseball establishment can afford to disregard the skilled women players who should long ago have been recruited for the Minors and the Majors.”—Dorothy Seymour Mills, baseball historian and author of Drawing Card: A Baseball Novel
— Dorothy Seymour Mills

“As a girl, Ila Borders had a dream. That dream became a desire, and that desire blossomed into a crusade: she would play baseball. Not softball. Baseball. She would throw the hard stuff past brawny male sluggers. Jean Hastings Ardell tells the story of this twilight figure coming out of the shadows to join a not always receptive mainstream. You may laugh. You may shed a tear. But surely you will applaud.”—Arnold Hano, author of A Day in the Bleachers
— Arnold Hano

“Ila Borders pitched her way through the special hell reserved for women who play baseball in America and has returned with enough inside baseball knowledge to please the most passionate fan. . . . [Making My Pitch is] a riveting, deeply personal story and a compelling addition to the fast-growing literature on American women in baseball.”—Jennifer Ring, author of A Game of Their Own: Voices of Contemporary Women in Baseball
— Jennifer Ring

“This book is a walk through baseball history as Ila brings the reader with her on her journey from Little League to independent ball and beyond. Ila’s story is not a typical baseball story, and everyone needs to read this book.”—Leslie Heaphy, associate professor of history at Kent State University at Stark and coeditor of The Encyclopedia of Women and Baseball
— Leslie Heaphy

“This book is a must-read for understanding what it’s like to be a baseball first. Ila’s courage to keep going forward against all odds is both inspiring and meaningful.”—Justine Siegal, founder of Baseball For All
— Justine Siegal

“The best baseball books are about more than the game. In this evocative memoir, lefthander Ila Borders recounts her struggles in the male world of professional baseball.”—George Gmelch, author of Playing with Tigers: A Minor League Chronicle of the Sixties
— George Gmelch

“Ila Borders is a role model. As the father of two daughters, both of whom have played, watched, and read about sports for as long as they have been able to do so, I have long awaited her memoir.”—Steve Gietschier, associate professor of history at Lindenwood University
— Steve Gietschier