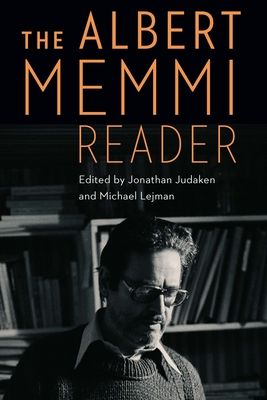 Born in 1920 on the edge of Tunis’s Jewish quarter, the French-Jewish-Tunisian sociologist, philosopher, and novelist Albert Memmi has been a central figure in colonial and postcolonial studies. Often associated with the anticolonial struggles of the 1950s and 1960s, Memmi’s career has spanned fifty years, more than twenty book-length publications, and hundreds of articles that are distilled in this collection.

The Albert Memmi Reader presents Memmi’s insights on the legacies of the colonial era, critical theories of race, and his distinctive story. Memmi’s novels and essays feature not only decolonial struggles but also commentary on race, the psychology of dependence, and what it means to be Jewish.

This reader includes selections from his classic works, such as The Pillar of Salt and The Colonizer and the Colonized, as well as previously untranslated pieces that punctuate Memmi’s literary life and career, and illuminate the full arc of the life of one of the great thinkers of the twentieth century. Selections from his later works speak directly to contemporary issues in European, African, and Middle Eastern studies, such as racism, immigration and European identity, and the struggles of postcolonial states, including Israel/Palestine.

Albert Memmi (1920–2020) was a French-Jewish-Tunisian sociologist, philosopher, and novelist. Jonathan Judaken is the Spence L. Wilson Chair in Humanities at Rhodes College. He is the author of Jean-Paul Sartre and the Jewish Question: Anti-antisemitism and the Politics of the French Intellectual (Nebraska, 2006). Michael Lejman is associate vice chancellor for institutional research and effectiveness at Arkansas State University, Mid-South.

"This reader is a most welcome addition to the slowly growing English-speaking archive of non-English postcolonial critics and thinkers and an especially welcome addition to the archive of non-English modern Jewish thinkers now more readily available in English. Memmi represents a fresh and inspiringly challenging voice that should no longer be ignored."—Willi Goetschel, H-Nationalism

“Memmi’s opus, presented as it is here, allows readers access to the literary trajectory of a distinguished writer and will breathe new life into current scholarship and teaching on colonialism, literature, theory, and Jewish history. A beautiful dialogue emerges, one that places Memmi’s ideas in conversation with himself and with readers in new and exciting ways.”—James D. Le Sueur, author of Uncivil War: Intellectuals and Identity Politics during the Decolonization of Algeria and director of the film The Art of Dissent

“This volume makes an extremely important contribution to numerous fields. Memmi’s work is of critical importance for postcolonial studies, Jewish studies, and studies in comparative racism; his is an exceptional and unique voice that adds nuance, detail, and depth to scholarship on North Africa and the Middle East, the Israel/Palestine question, and even contemporary issues of migration.”—Lia Nicole Brozgal, author of Against Autobiography: Albert Memmi and the Production of Theory