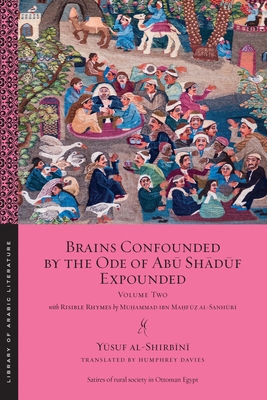 By Yūsuf Al-Shirbīnī, Muḥammad Ibn Al-Sanhūrī, Humphrey Davies (Translator)
$16.00
ON HAND in at least ONE of our stores. Click through or call for up-to-the-minute availability.

This is book number 7 in the Library of Arabic Literature series.

Witty, bawdy, and vicious, Yūsuf al-Shirbīnī's Brains Confounded pits the "coarse" rural masses against the "refined" urban population. In Volume One, al-Shirbīnī describes the three rural "types"-peasant cultivator, village man-of-religion, and rural dervish-offering anecdotes testifying to the ignorance, dirtiness, and criminality of each. In Volume Two, he presents a hilarious parody of the verse-and-commentary genre so beloved by scholars of his day, with a 47-line poem supposedly written by a peasant named Abū Shādūf, who charts the rise and fall of his fortunes. Wielding the scholarly tools of elite literature, al-Shirbīnī responds to the poem with derision and ridicule, dotting his satire with digressions into love, food, and flatulence.

Volume Two of Brains Confounded is followed by Risible Rhymes, a concise text that includes a comic disquisition on "rural" verse, mocking the pretensions of uneducated poets from Egypt's countryside. Risible Rhymes also examines various kinds of puzzle poems, which were another popular genre of the day, and presents a debate between scholars over a line of verse by the fourth/tenth-century poet al-Mutanabbī. Together, Brains Confounded and Risible Rhymes offer intriguing insight into the intellectual concerns of Ottoman Egypt, showcasing the intense preoccupation with wordplay, grammar, and stylistics and shedding light on the literature of the era. An English-only edition.

Yūsuf al-Shirbīnī (Author) Yūsuf al-Shirbīnī was a well-educated Egyptian from the eleventh/seventeenth century, thought to originate from the town of Shirbīn, then a significant rural center in the eastern part of Delta. Little is known about him--including his social standing and profession--beyond Brains Confounded and two other extant texts: The Pearls (Al-Laʾāliʾ wa-l-durar) and The Casting Aside of the Clods for the Unstringing of the Pearls (Ṭarḥ al-madar li-ḥall al-laʾāliʾ wa-l-durar). Muhammad ibn Mahfuz al-Sanhuri (Author) Muḥammad ibn Maḥfūẓ al-Sanhūrī is an eleventh/seventeenth-century author who likely hailed from Egypt's Fayyum region, although nothing else is known about him. Humphrey Davies (Translator) Humphrey Davies is an award-winning translator of some twenty-five works of modern Arabic literature, among them Alaa Al-Aswany's The Yacoubian Building, five novels by Elias Khoury, including Gate of the Sun, and Aḥmad Fāris al-Shidyāq's Leg over Leg. He has also made a critical edition, translation, and lexicon of the Ottoman-period Brains Confounded by the Ode of Abū Shādūf Expounded by Yūsuf al-Shirbīnī, as well as editions and translations of al-Tūnisī's In Darfur and al-Sanhūrī's Risible Rhymes from the same era. In addition, he has compiled with Madiha Doss an anthology in Arabic entitled Al-ʿāmmiyyah al-miṣriyyah al-maktūbah: mukhtārāt min 1400 ilā 2009 (Egyptian Colloquial Writing: selections from 1400 to 2009) and co-authored, with Lesley Lababidi, A Field Guide to the Street Names of Central Cairo. He read Arabic at the University of Cambridge, received his Ph.D. from the University of California at Berkeley, and previous to undertaking his first translation in 2003, worked for social development and research organizations in Egypt, Tunisia, Palestine, and Sudan. He is affiliated with the American University in Cairo.